This is the first time I’ve had a week off producing this self imposed and totally self-directed post (conversation) via this blog.
I was relieved that on a long weekend I didn’t have to push this particular task further into my ‘productive’ space.
I felt quite proud of myself that I had allowed time for ramped-up creating instead of assessing the previous weeks production, or lack of production.
Initially I felt relieved that I had gently pushed out this (self imposed) deadline to my advantage.
Now as I settle to assess the last two weeks I am not so sure….

Certainly an overview of two weeks instead of one is always going to be more difficult but already, after this gap, I have a weird sense of loss.
This time-gaining exercise has actually made it harder to reflect on the past (two) weeks.
Already I feel that I will lose depth if I try to cover double the days.
Perhaps I am doing a disservice to my original aims?
Not sure and I don’t want to make hasty judgements.

So what have I been up to in this double day week?

I have been working constantly on the long winded Sulphur Crested Cockie project for a start. I have built up a load of cast-offs as the works very slowly reveal themselves.
This trio now contains abstracts of a wing, a crest, and a tail.
The trio will represent, in story and title only, stories of three famous domesticated Australian Sulphur Crested Cockatoos who all lived to a great age – Cocky Bennett, Cockie and Fred. 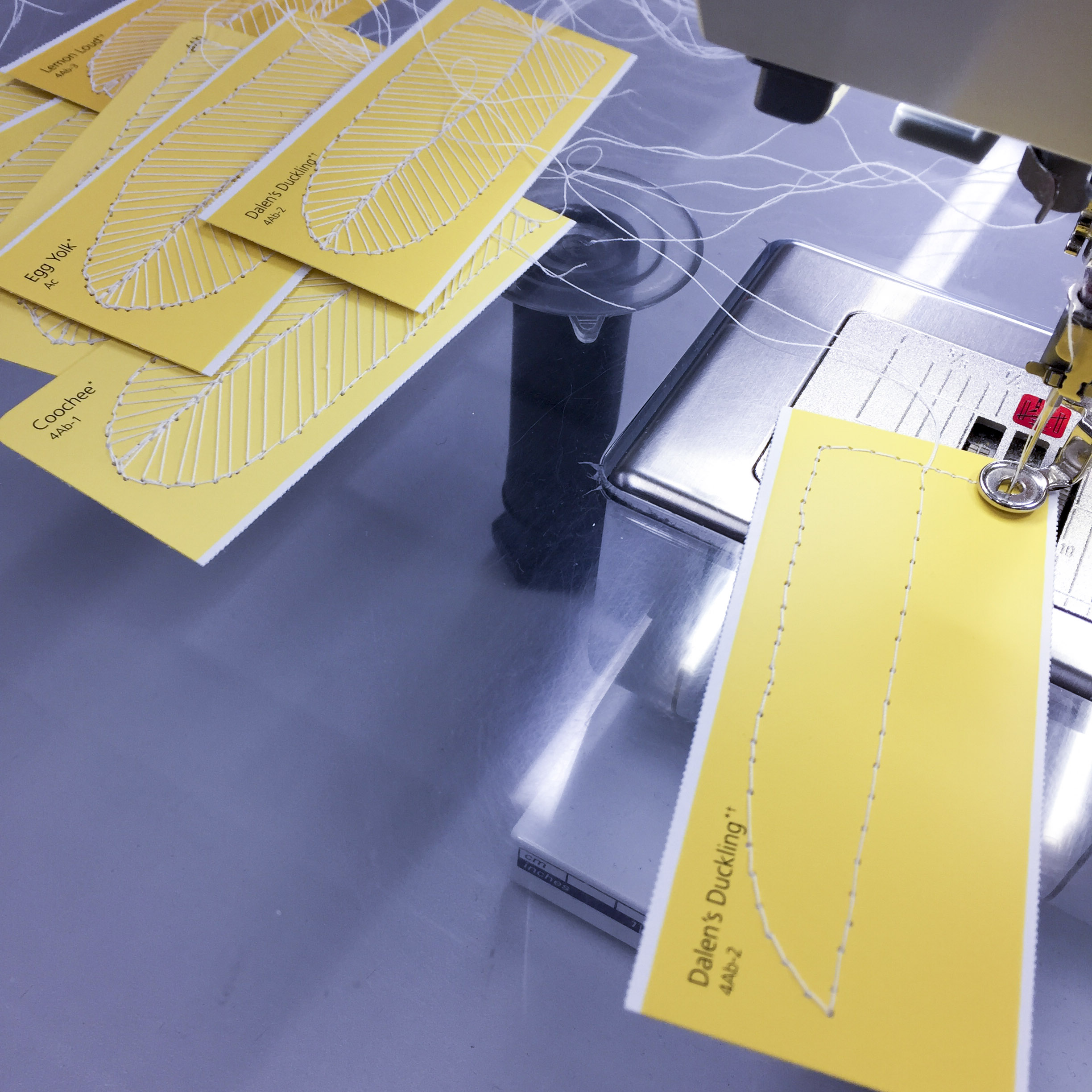 I have fought long and hard, backwards and forwards, to refine the colours. I love the true-to-life sulphur yellow colouration but as I am sequestering colours from Taubmans I need to use what I am given….though actually my frequent visits to Bunnings has me greedily, guiltily, but very thankfully taking. 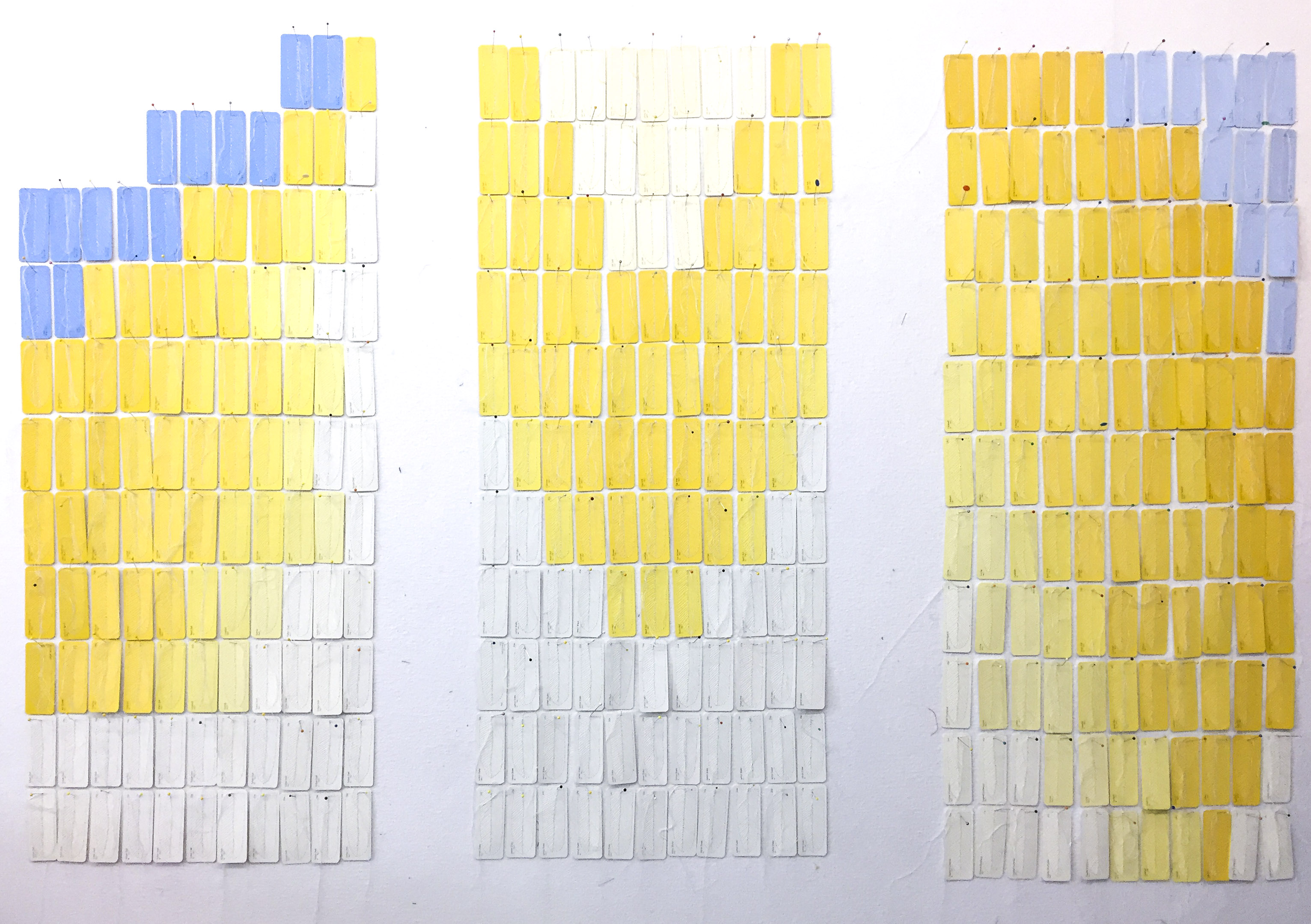 Realism is impossible in this technique as my ‘pixels’ are not only large but they are also rectangular.
Sometimes I feel like the task is set to fail. Sometimes I feel that it will be okay.
I cannot stop though – this particular piece has festered so long that its slow reveal is making it necessary to keep plugging away.
The challenge is good for me.
I will finish it / them in the coming weeks….

The deadline of having work for The December Exhibition is a great incentive as is my desire to not diversify from my current path of paint chip/Feathering the Nest AND the Knit1Purl1 series.

Still, I cannot stop the ideas from flowing….Knit1Purl1 obviously needs me to make sculptural ‘balls of yarn’ big and small. And I would love to do some wide knitting and some fair isle, and, and, and. I’ll leave all the other flow-on ideas for the moment but how hard would a few balls of yarn with yarns, (stories), at the core of them be? I’d love to make a pile of them. 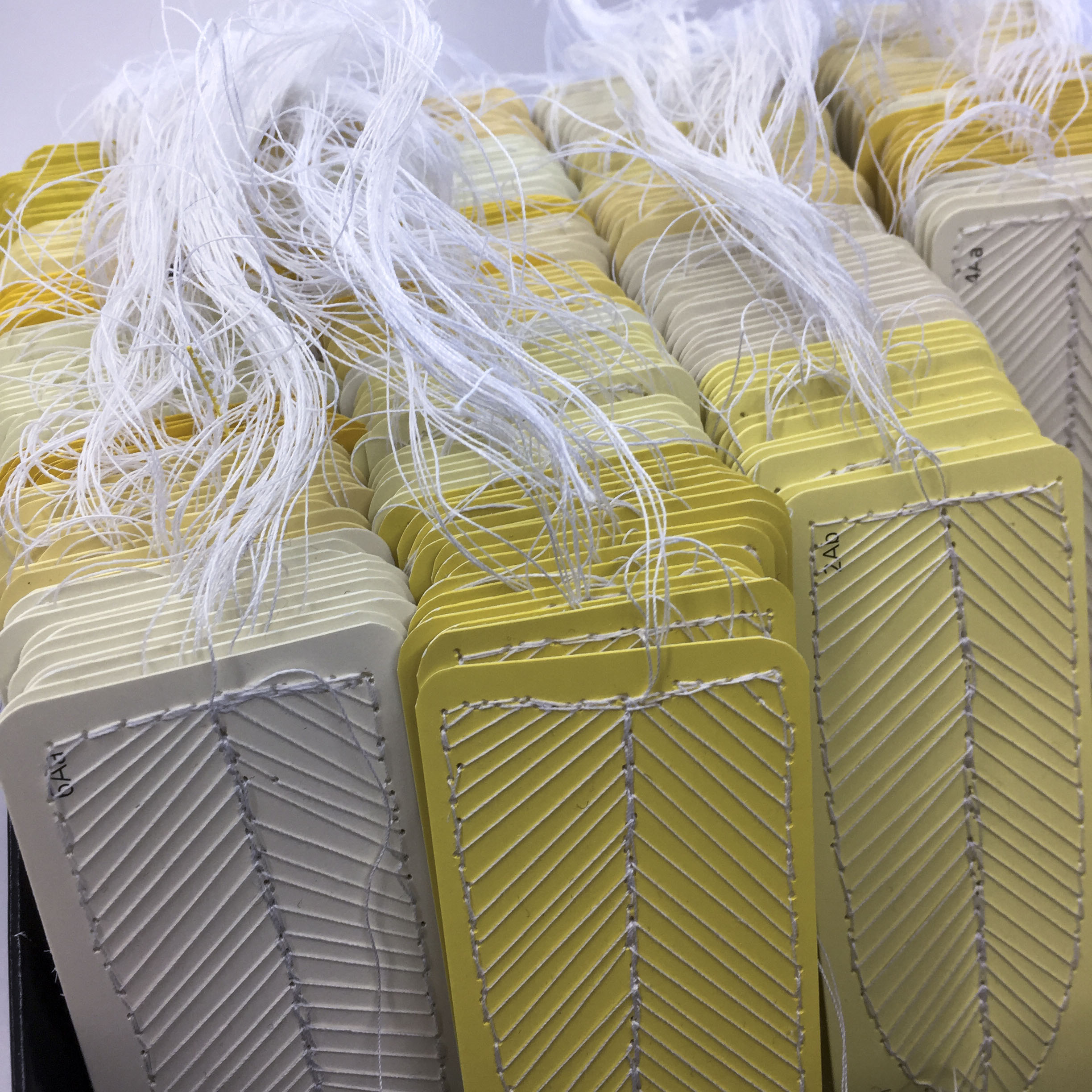 Part of my eagerness to continue on these two themes is that I have, over the years, made many works that I would have loved to progress past their singular status. I have plenty of next in the series projects started…. then I have had to box and file them away to turn to the next important project. They await their time but usually there is no time for them to return to the lights of the studio as the next great project takes precedence. I carry the guilt of too many works-in-progress. I much prefer to be a finisher – to tick the box and to cross that thought line from my task list.

Another part of my desire to continue on these two themes quickly is the need to change tack next year in preparation for next year’s December Gallery show.
Helen and I will be working to a subject and, although I will be able to work with my current themes – the domestic, home, women’s work and the decorative – the techniques, materials, and overriding subject matter will change.

As a result I feel as though I only have a handful of weeks to finish projects which are well underway. I doubt whether I will have any time to develop any new pieces – even if they are only balls of yarn or simple nests.

As always though, I live in hope and I scheme unrealistically… what if I stayed in the studio until 10pm every night? I do that now occasionally but the next day is then skewed….

What if I could become more savvy with the domestic side of my life.
Meals?  Simple and quick. Heck I mostly do that already. I am no Masterchef, I don’t labour lovingly at the stove like I did when my youngsters were young and cooking was a wonderful way to dream and create. 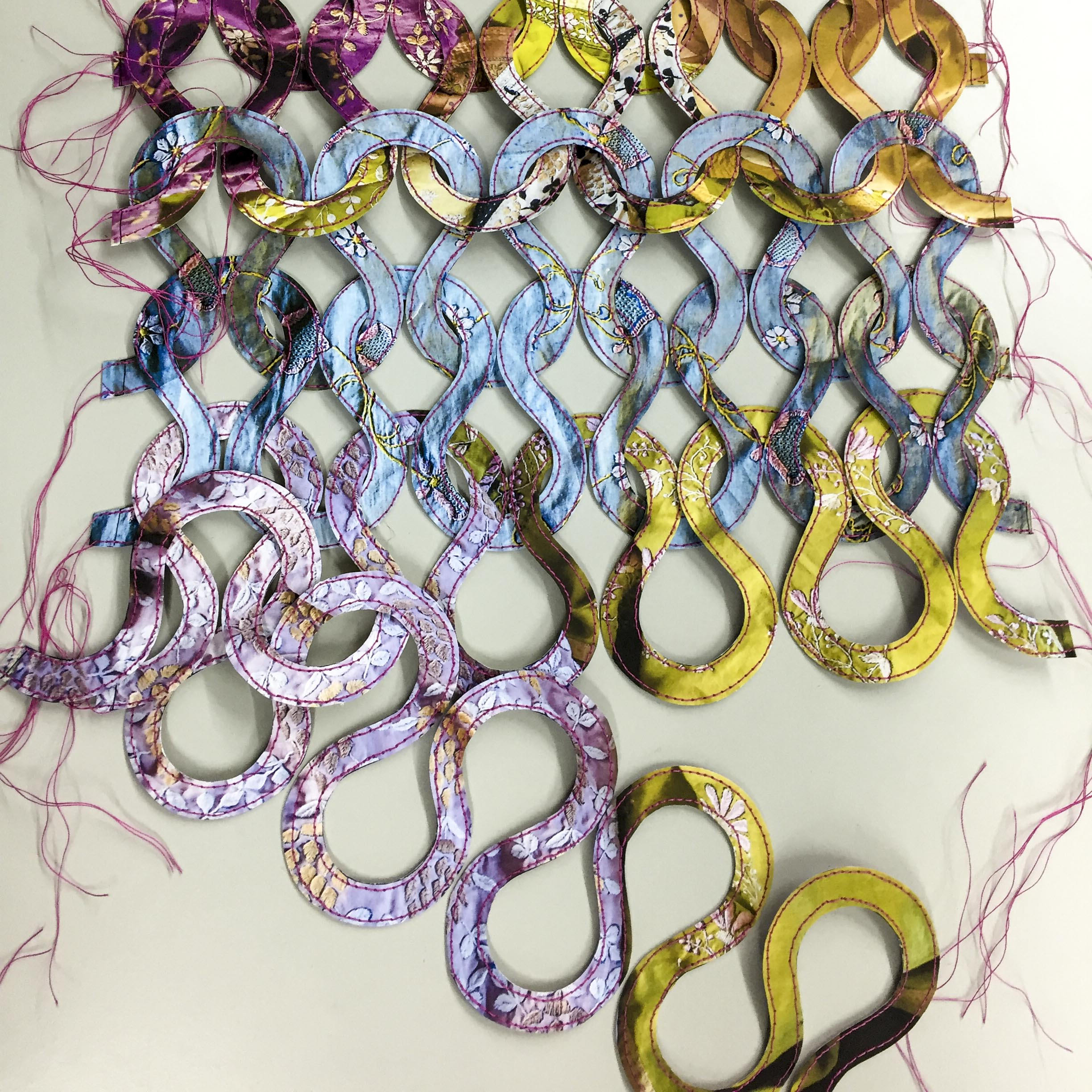 I have all but finished the four paper K1P1 – I just need to complete a couple of needles and labels. I have really enjoyed these quick projects, partly because finally I am using some of the thousands of trip photos I take, partly because they look great hanging on mass (even on a wall jumble). Sort of a pity that they are not all ticked off as complete but it is lovely to be living with them jumbled on the board instead of them boxed away for safe-keeping. 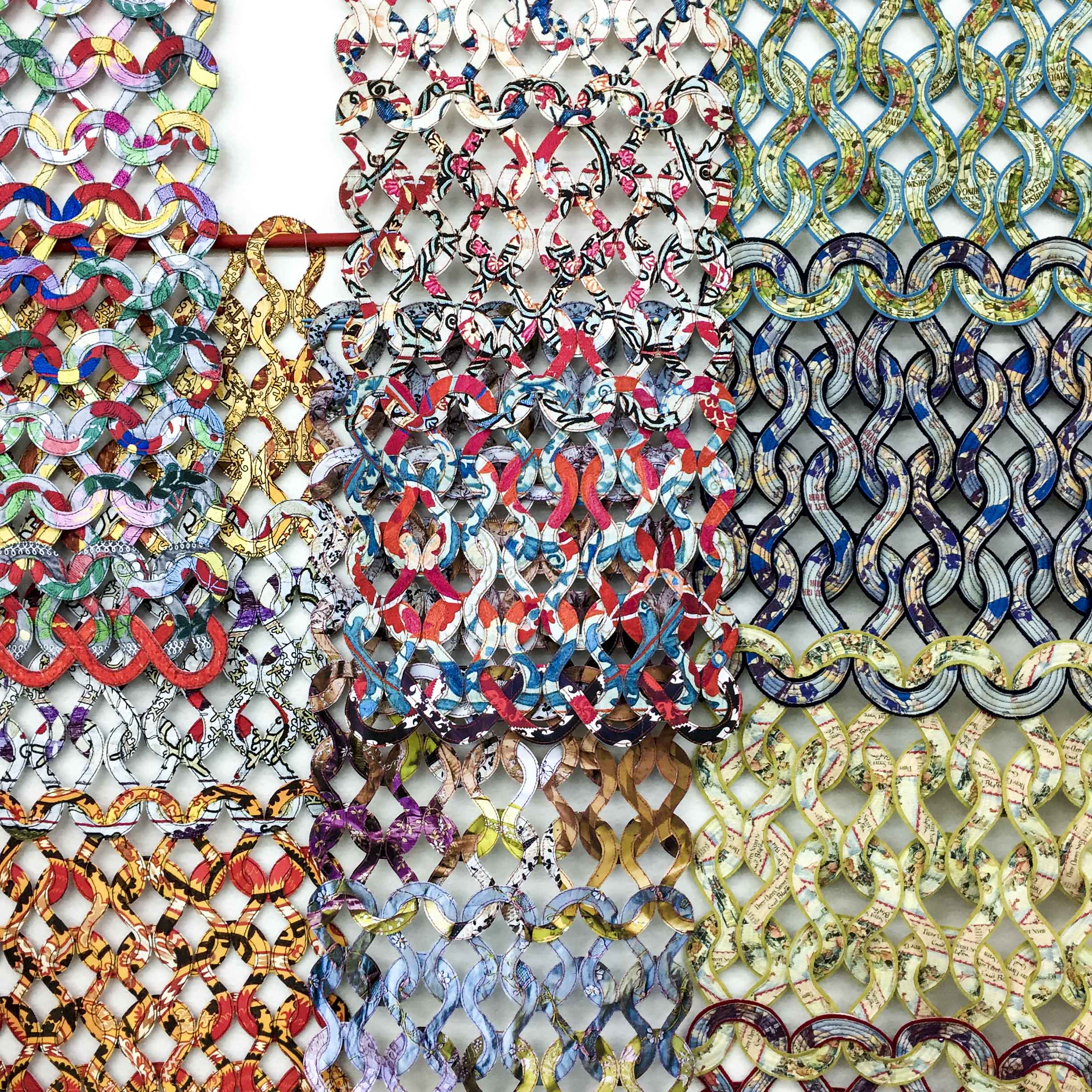 I did get out to three galleries– something that has been a very unfortunate low priority of late;

I visited WAFTA’s Altered States exhibititon. No photos were allowed so the photos following are from Greg Pryor’s beautiful ‘Looking Glass’ room at AGWA which I saw straight after. Beautiful, clever, communal drawing. Inspiring in this awkward space. 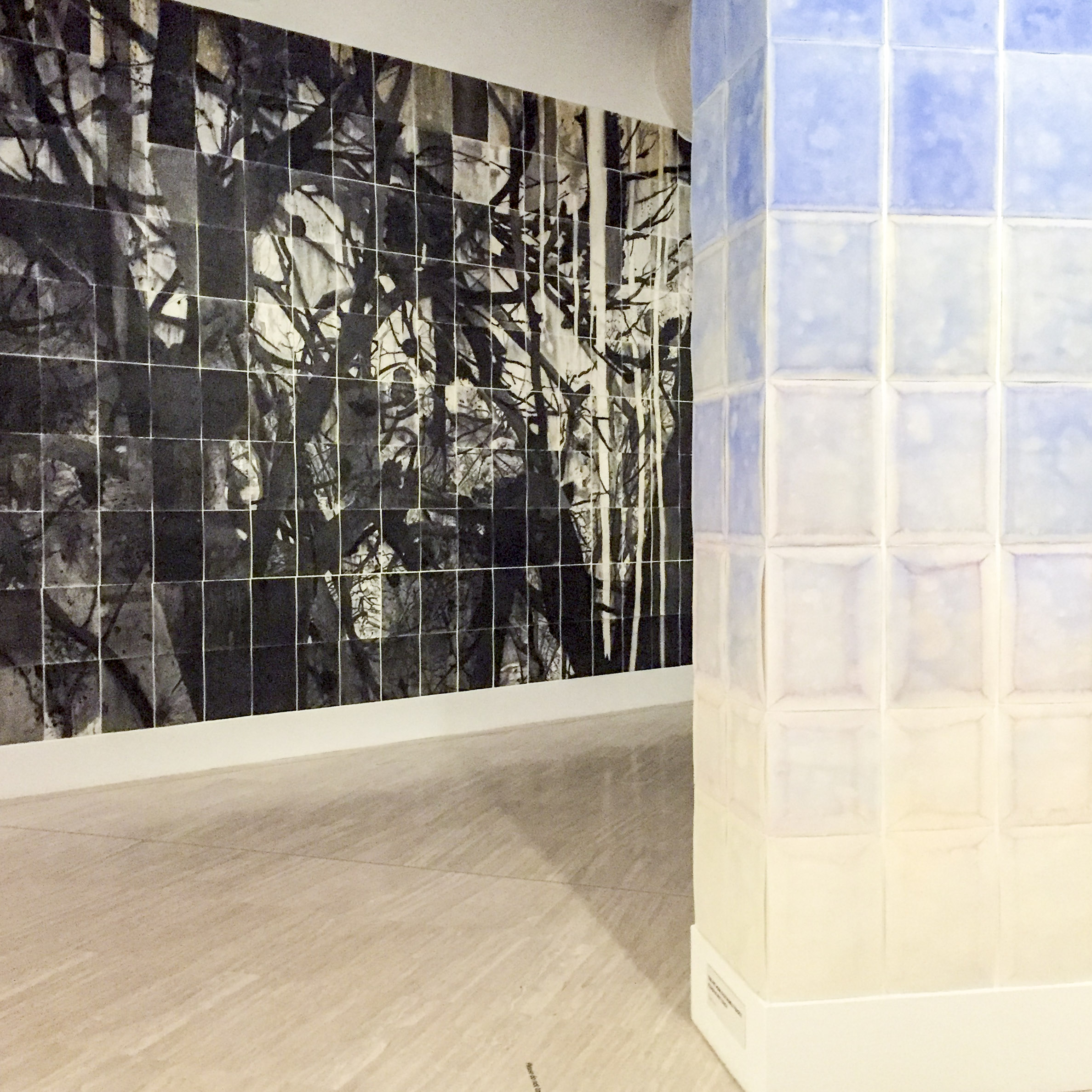 We also attended the opening of the Print Awards at FAC. The bloke and I rarely miss the Print Awards and we’ve have very happily purchased a few Print Award prints over the years.
There were a couple that we both loved but (luckily/unluckily) they were both way too big for our little abode…which also meant that we were way out of our budget comfort too. Still, we thought the standard was the best overall in years. 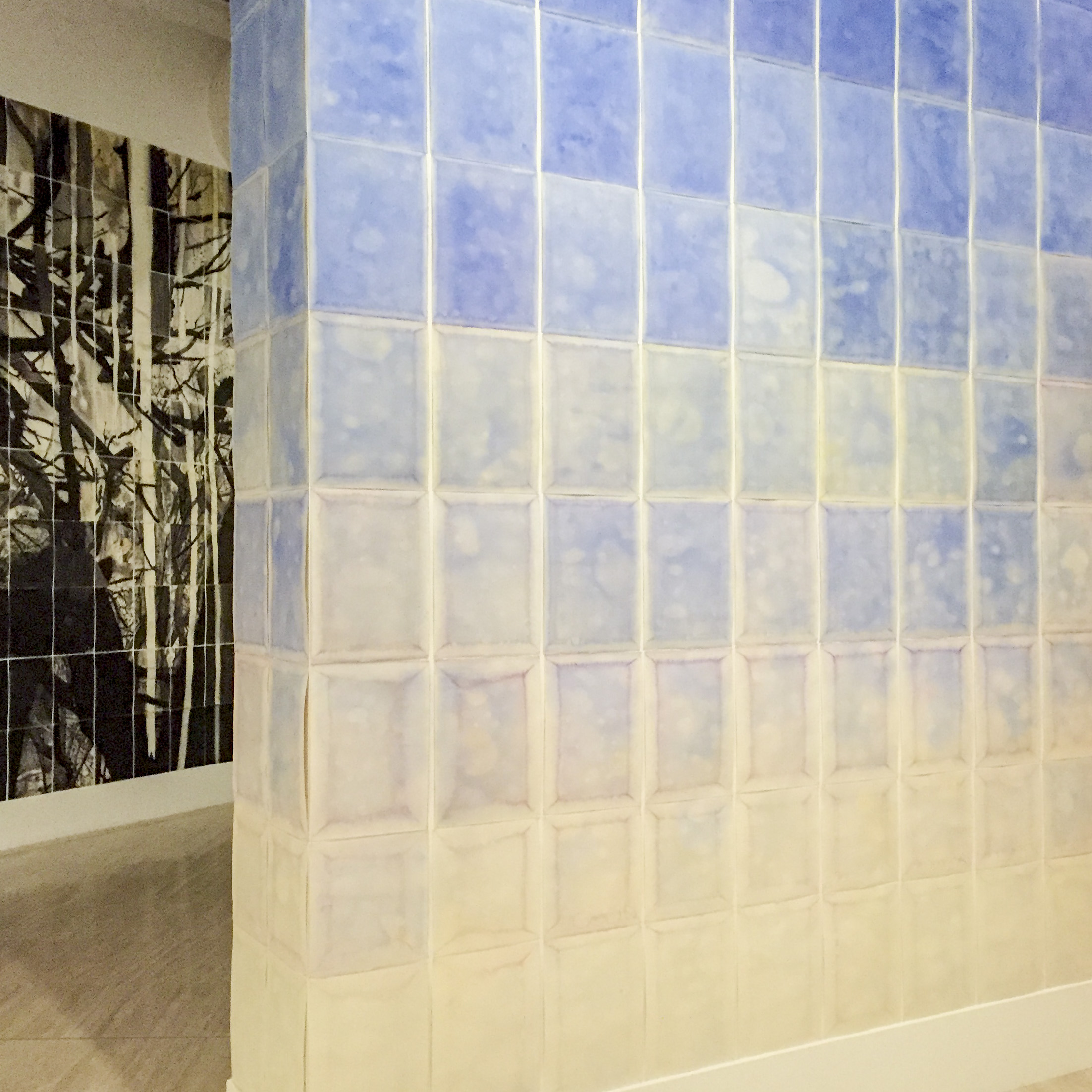 We did manage to get to our little house over the long weekend. This year has been way too busy to get there as often as we want – which means that projects there are also VERY sluggish. 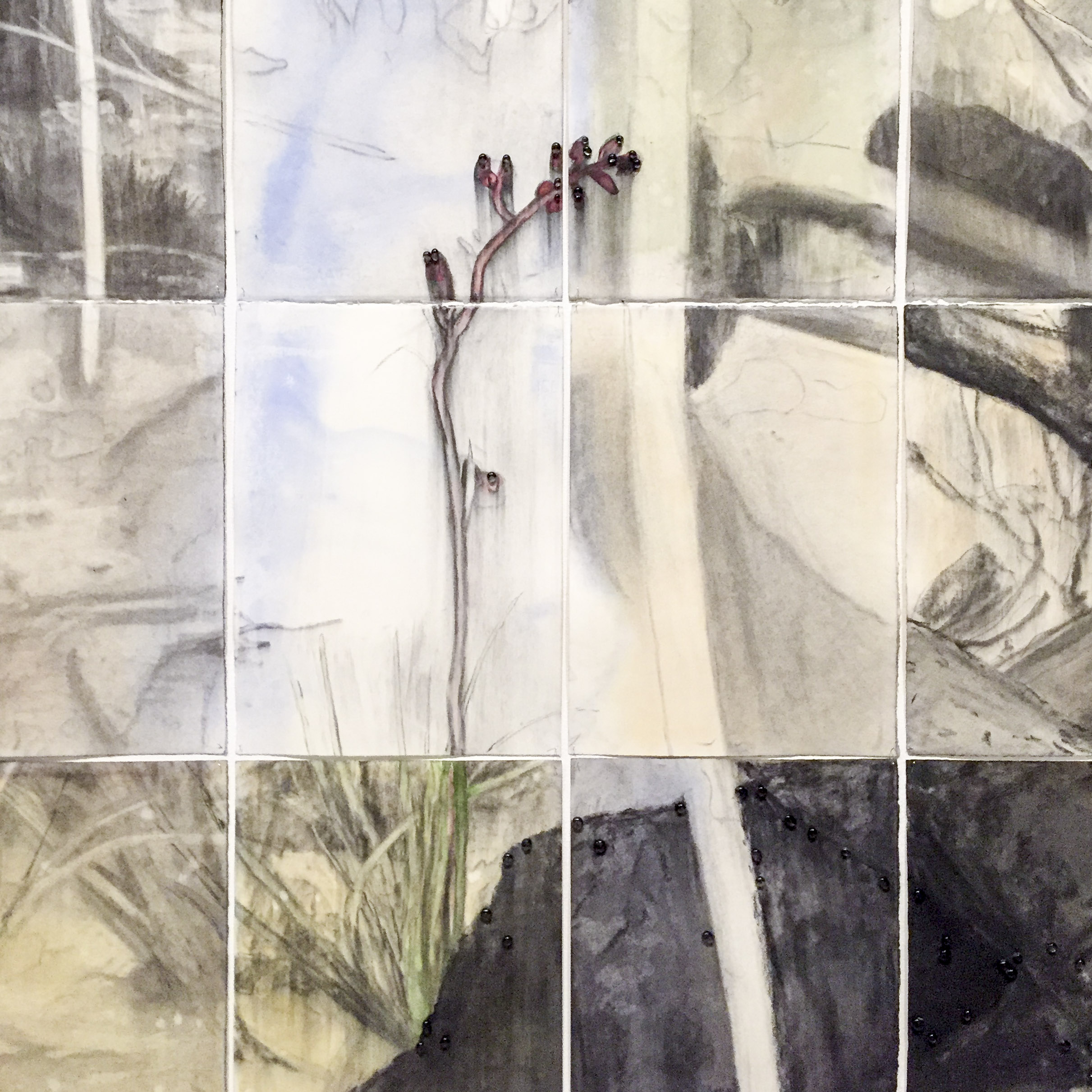 The girls shed has had its first coat of white – floor and ceiling. The tongue and groove is beautiful but it is hard work. The ceiling is worthy of a spray gun (we may have to borrow one to ease the neck pain).
I loved our THREE rugged up/fire feeding nights and our THREE putty and paint covered days. 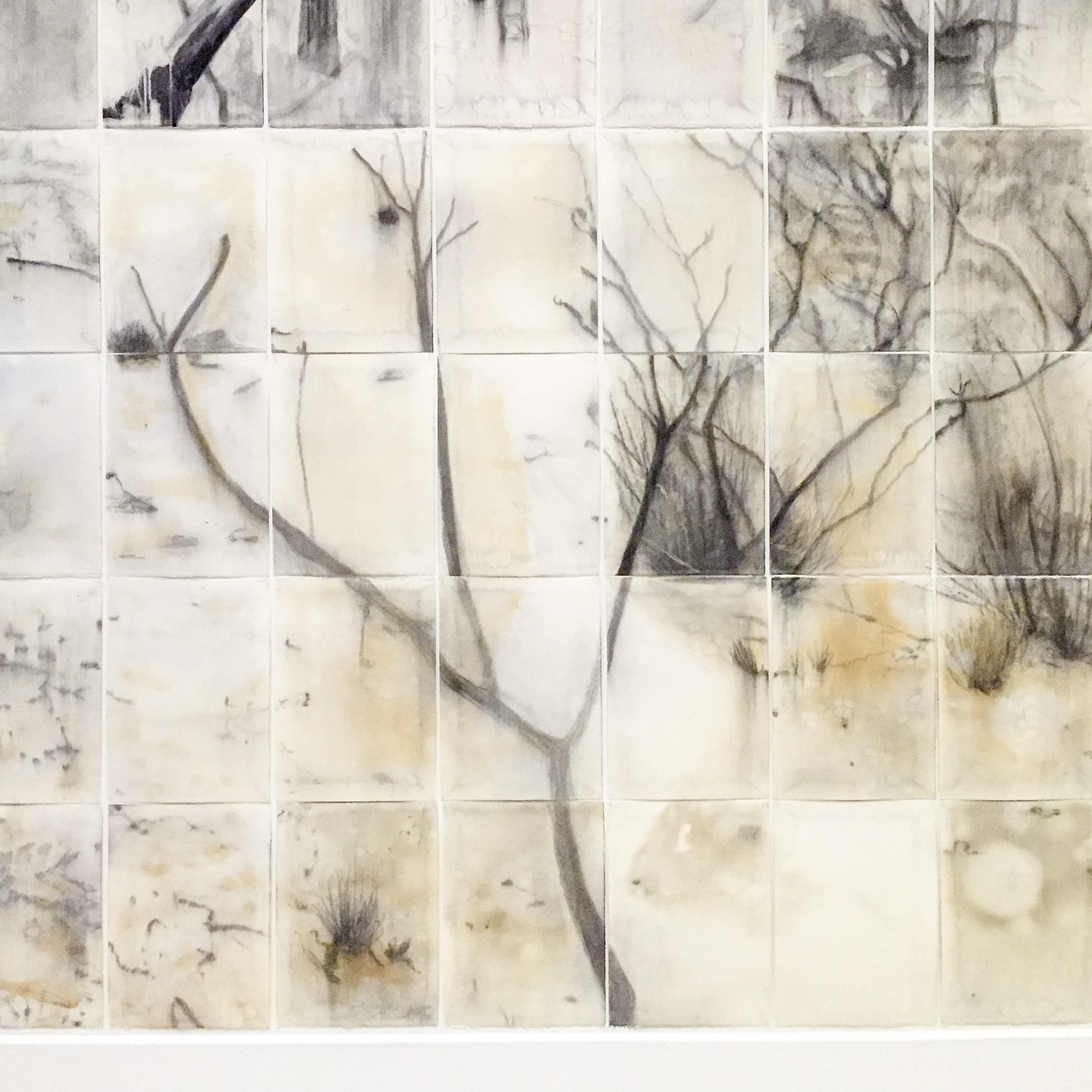 Hopefully, by christmas (it will happen because I write it in bold), we will have a clean, air conditioned space for the girls to create in and the family, perhaps, to play in.
We will have forgotten our cricked necks by then.