Two things to be quick about this week;
Working towards twentyONE+ targets and deadlines – fast and furious – and trying, trying, trying to get a hang-worthy 40cm x 40cm Art Quilt ready to enter OZQUILT’s Australia Wide 5.

The finish line is approaching for twentyONE+. Things are quickly falling into place with only a few hiccups. Still plenty of hours, many conversations, emails and head down action to come BUT we are progressing in a timely manner.

My AW5 entry on the other hand, after many, many hours of intensive stitch has failed.
I am disappointed but I was also prepared for this gamble not to succeed.
Starting a new area of exploration can be fraught and when that exploration was in both technique and subject matter it is doubly difficult.
AND
I have realised of late that I need a long time to percolate initial works in a series – and I do much prefer to work in a series – they almost need to be born resolved.
The ideas come fast and furious (and are always brilliant:) which is why I think I teach well and critique easily.
So the ideas are there and I see the completed work as a vision in my head but often the interpretation into quilt or textile doesn’t match that vision. 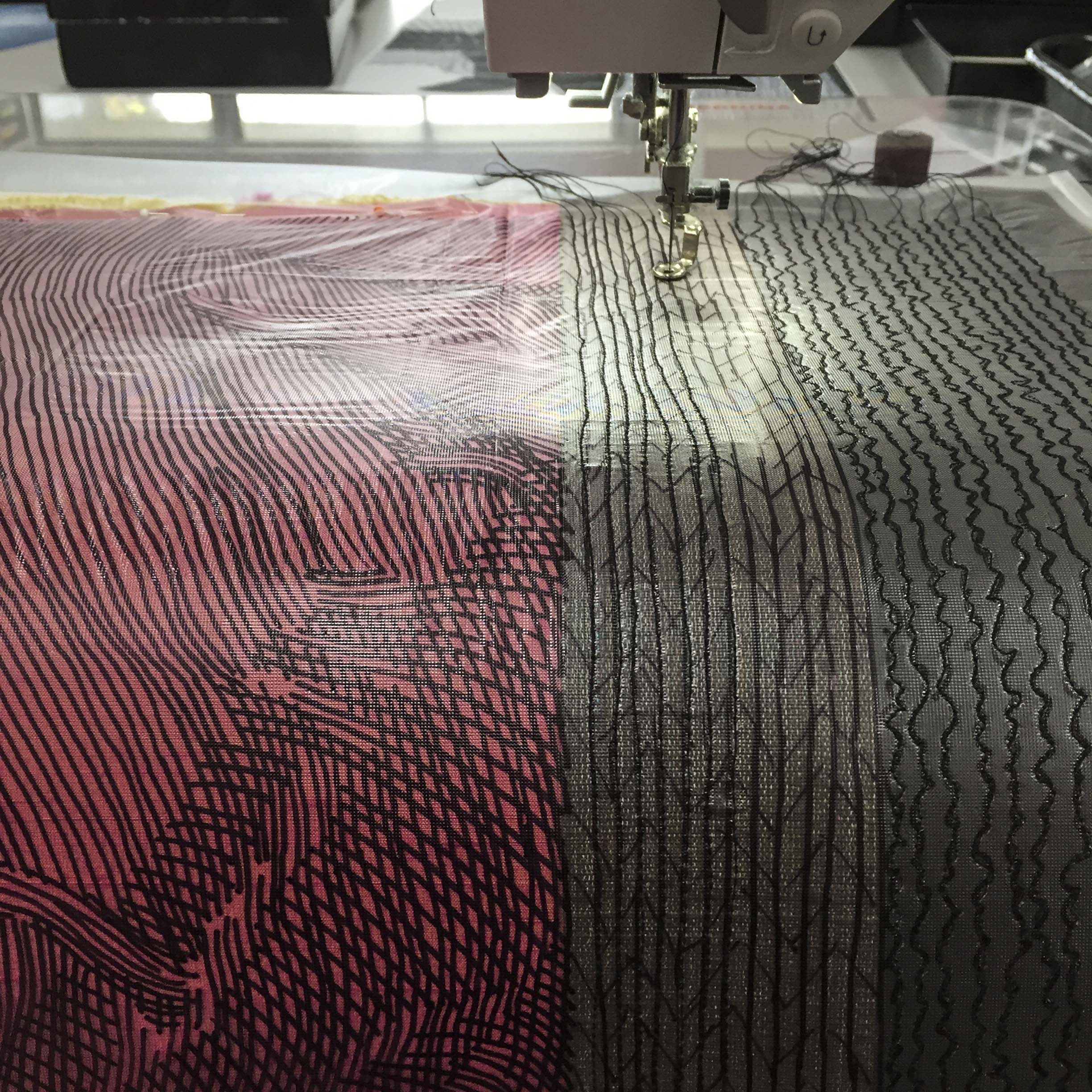 Technically the piece I worked on is okay but it does not illustrate what I love about the subject matter so it does not work for me visually at all. The beautiful colours and sheen of the silks I chose have been obliterated by the black ‘engraving line’ stitch much more than I was prepared for.
I need to rethink BUT I just don’t have time to play and to get to know the subject – I have priorities elsewhere.

Invariably it is when I am in this rushed state of meeting a deadline that I end up being disappointed – so the poor result is no surprise.
Having said that I did enjoy the process. The over the top stitching/quilting was a lovely challenge. 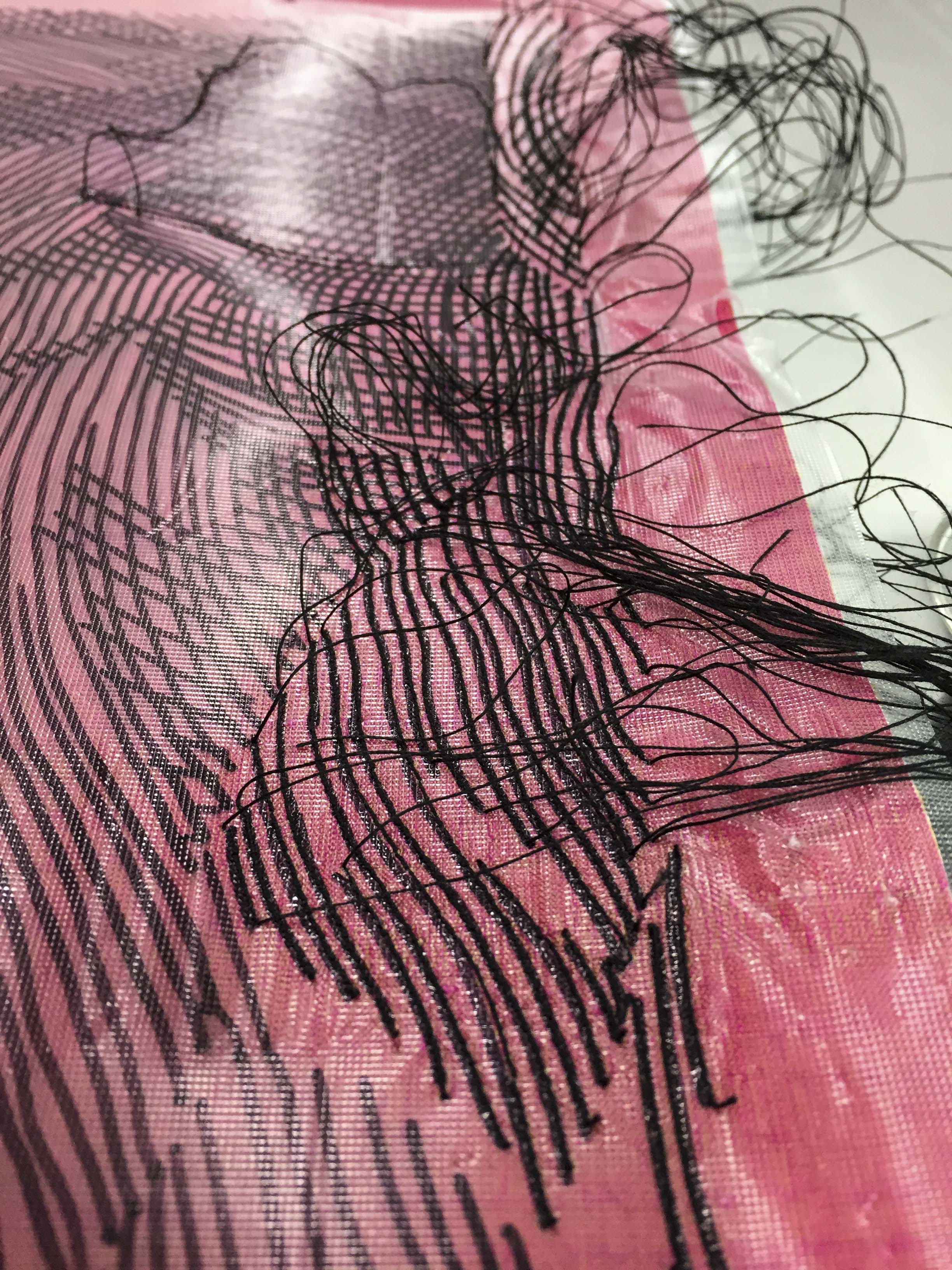 Whereas my joy in playing, albeit slowly, with the paint chips is making my heart gently glow. I love the process and I love the resulting visual. I love the solidity of these spare works.
It is as though I have the base line sorted and so now I can start to both play and to sing…if that makes sense?

What doesn’t make sense at the moment is starting on yet another thought-line and technique when I have bigger priorities and shrinking time. My longed for works celebrating etching marks is almost certainly to be sent off to the back burner – joining many other brilliant thought lines….unless I can re-envision the idea in my head in a style that I have already resolved….?
OR
I could simply do a version of the paint chip feathers for AW5 –  but it is a traveling exhibition and whilst they are VERY sturdy mounted on board and could be quilted onto fabric, as I have trialed that, I worry that they may struggle to travel for years if sandwiched between other quilts. 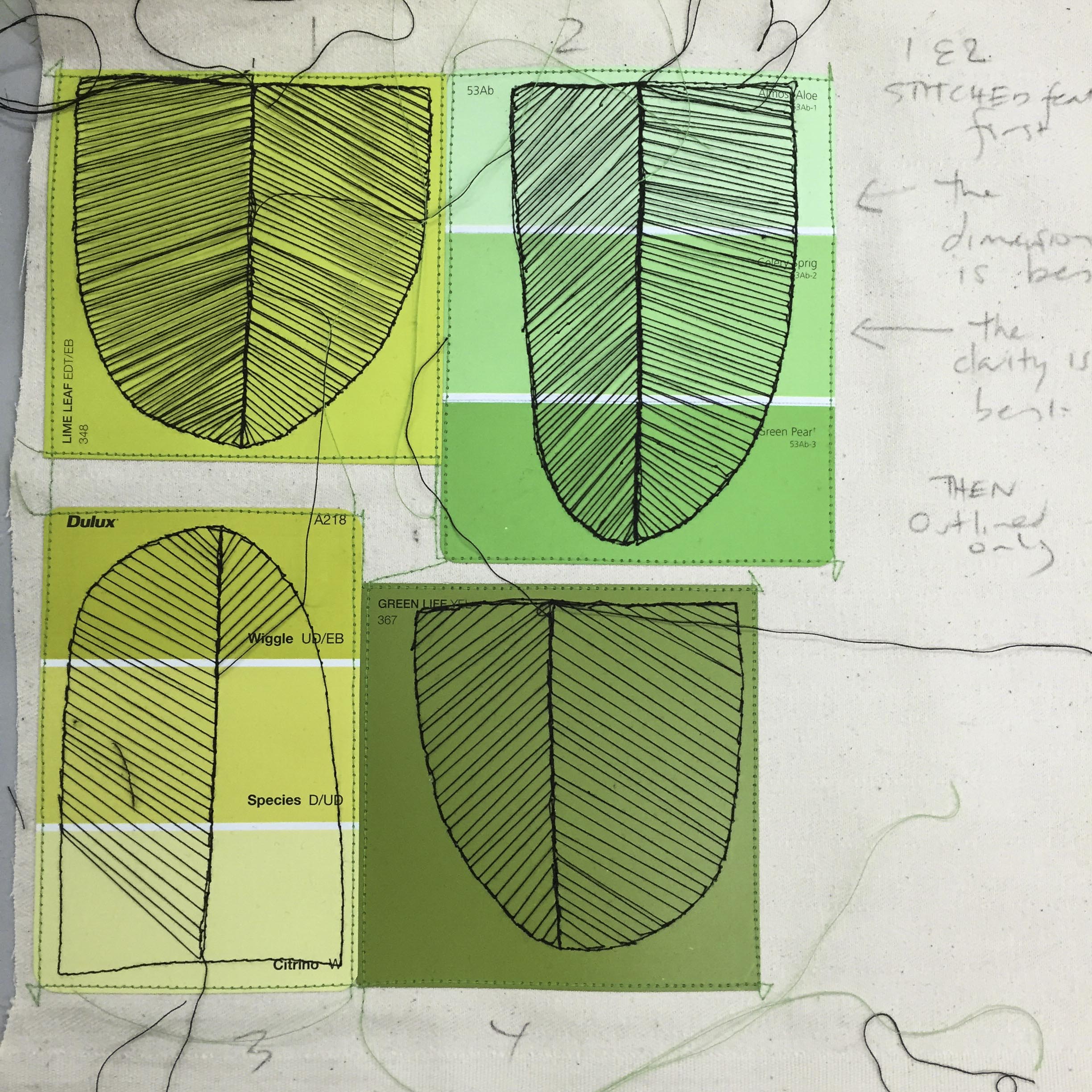 So where is my brain nervously flitting?
Pick another of the three sets of images I decided on last week? This time print digitally and work at it in a different manner?
Return to another established theme?
Reinterpret the ideas behind the paint chip series as a quilt?
Or put myself out of my misery and forget about entering anything?

I’ll see how the next few weeks pan out…there is still a little bit of time….
The really interesting background brain chatter that I have identified though is that I don’t want to be making quilts right now….hmmmmm. 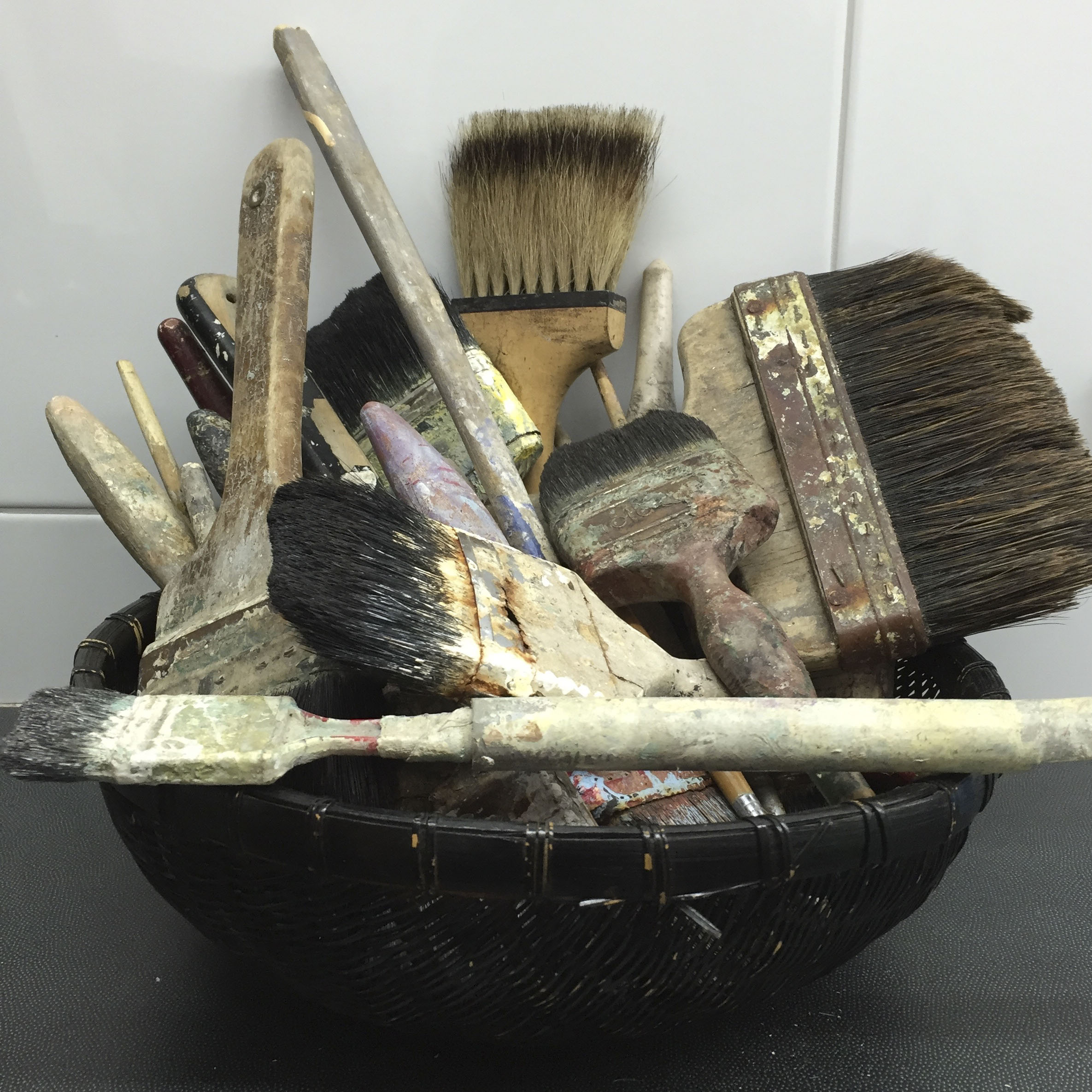 Sandwiched between the constant bustle of the week’s tasks the slow relief came in a few ways. A visit from a young family friend who is living, for the while, in Toronto. We had a long catch up early in the week enhanced by Miff and Flick and Esther’s company.

Miff and the girls returned on the very wet Friday when a planned visit to the zoo with four grandies was rained out. A highlight for me that day was setting up Esther for painting….. and boy did she concentrate.

Painting at our place has been a Sunday night affair with George and Esther wielding their great-grandfather’s large brushes outside, dipped in a bucket of water. Our tiles, windows and pavement get painted. A clean and yet messy affair.
So on Friday when Esther asked to do some painting that was what she meant.
I, instead, decided to set her up in the studio.
A drop sheet on the table, an apron of mine on her, her Tripp Trap chair pushed in tight and a tray of old watercolours. We made marks together. We talked colours. She concentrated. Her focus and her two handed approach was a delight to see. The REALLY wonderful slow down was bought about by the safe arrival of grandie #5 on Wednesday morn, and then on each of my subsequent frequent visits to see him.
Such a relief and a pleasure to meet this very alert boy.
Brannon James Mullen, son of Brodie James Mullen, grandson of Brendan James Mullen, great grandson of Hugh James Mullen (dec. – one time painter & decorator, supplier of those enormous paintbrushes:). 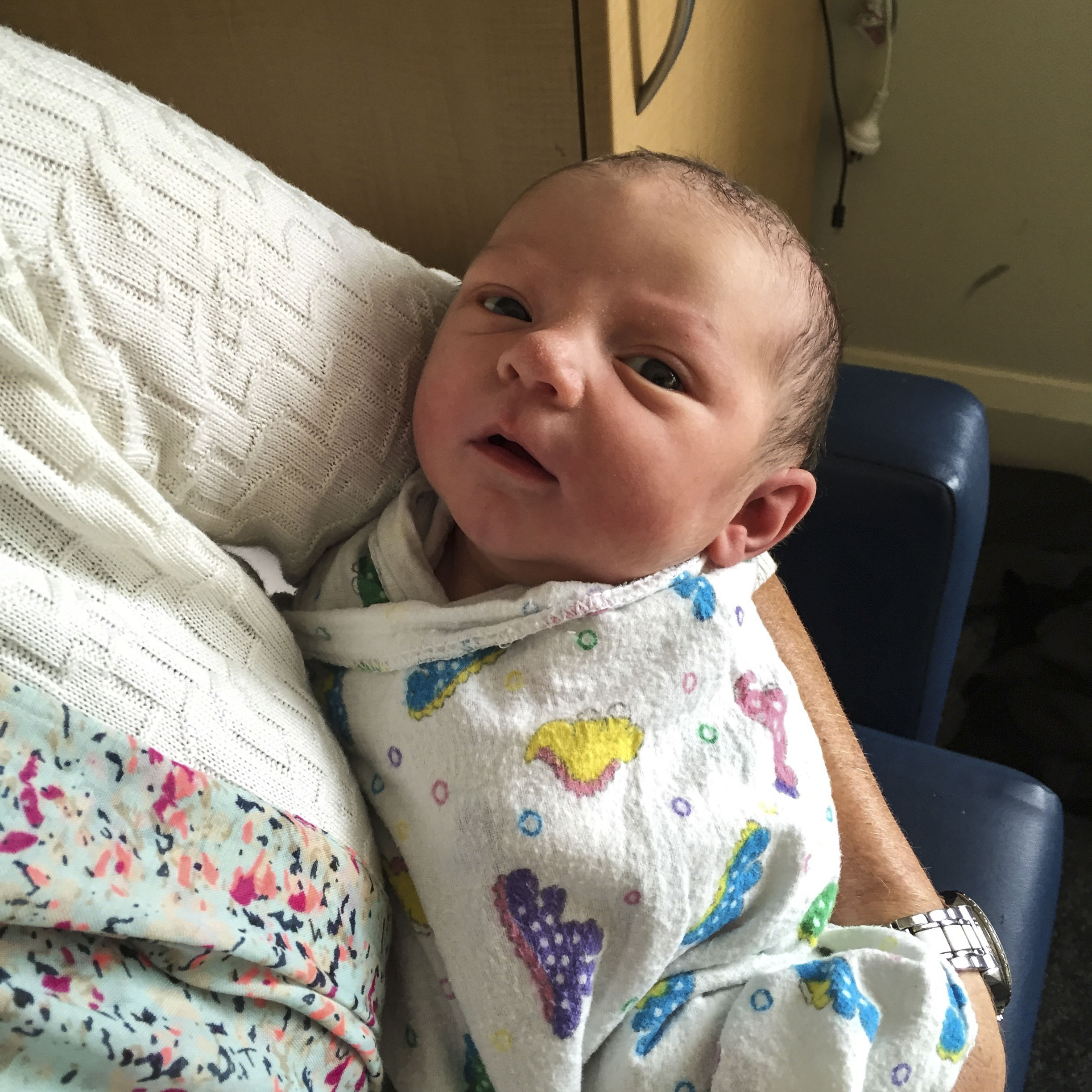 We now have, for a couple of weeks, five little ones under two and a half years of age.
The difference in their ages will minimise very quickly.
Our family life will get more and more interesting.