I can’t let it go….
When I wrote last week I was VERY close to giving up on pulling together a piece to enter in OZQUILT’s AW5 – even though there are still a couple of weeks till the due date.
I had been flitting from hither to thither with new and old ideas and techniques, all of which failed to launch.
My head was a whirlpool of ideas held within a pool of indecision.

On Tuesday morn I awoke ready to act  *fib alert * I was actually awake all night thinking about a piece that could feature my current preoccupation/obsession of stitching paint chips. Morning light simply meant that I needed to fire up to make real those immaculate visions.

Originally I had discounted the paint chips, as I assumed that they may not travel well.
Instead the inspiring/insistent night voice assured me that with a little tweak things would be okay….
So I was back to paint chips and digital printing primarily because both of those areas of exploration I am really enjoy working with at the moment. They are part of the story that I eagerly need to continue with.

I picked a pic of an ancient engraving to print – Victor Victorszoon’s Swartte Swaane drift op het Eyland Rottenest of 1726.
My printer is a beauty that will allow me to turn out a 40 x 40cm masterpiece – which was part of the impetus – clean, seamless, and beautifully detailed. 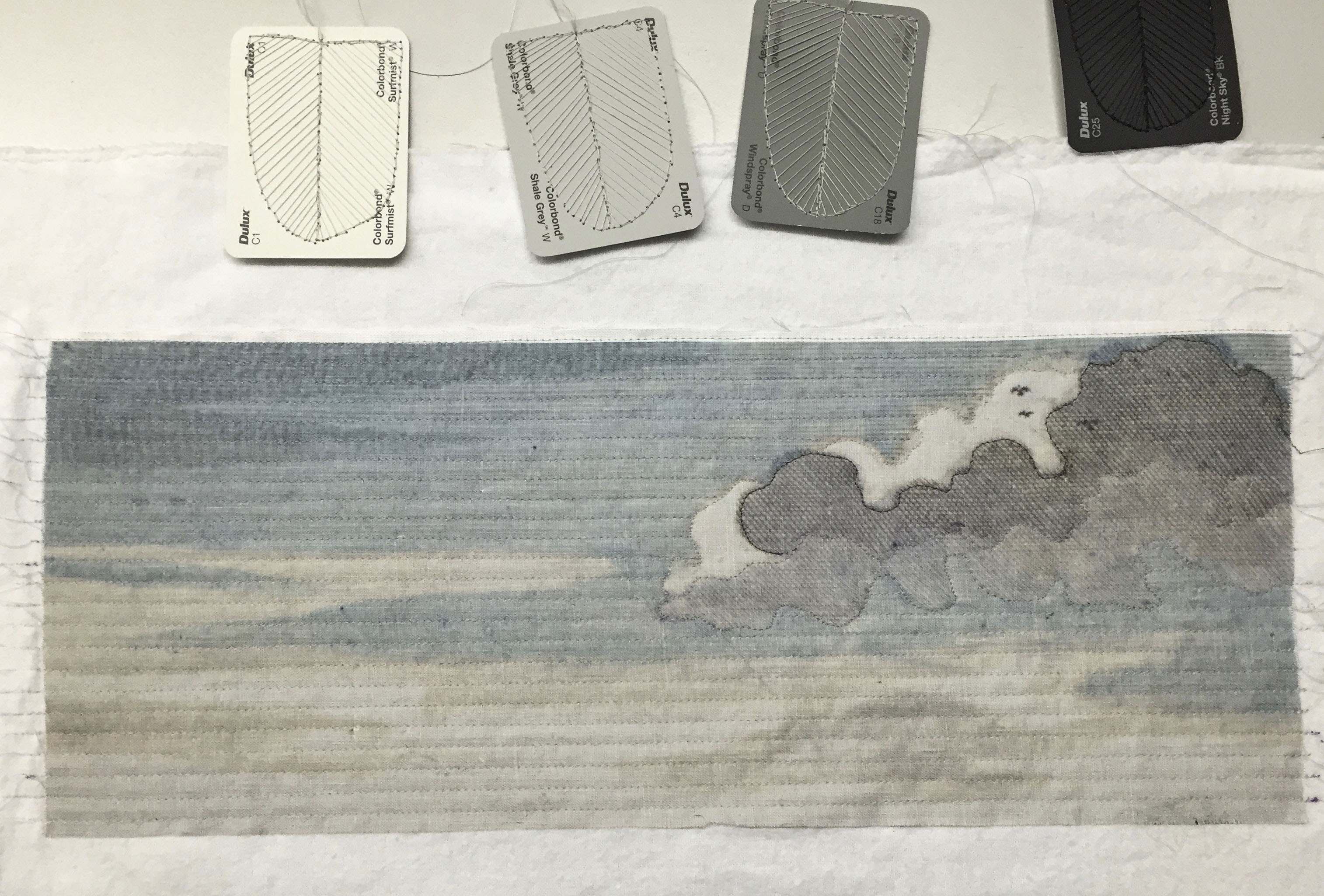 I cut an A2 piece of prepared linen and set up the artwork in InDesign, manipulating lightly. This size was enough to print both the 40 x 40 and another sliver of sky to trial the functionality of the process.
Off and running confidently with fingers crossed.

Slowly, quietly, the trial piece was worked on to near completion.
I then turned to the ‘real’ piece and slowly, quietly, it was worked on in a similar manner.
I had also given myself a deadline – to stop procrastination and over thinking – we had a photo shoot booked for next Tuesday.

Amongst the slow and quiet of artistic endeavour there was a raft of decisions to be made for twentyONE+. Lots of action culminating in printing and email invites.

It was also a big week with the Grandies which included a first time trek to the Zoo with four of them.
and
I shouted George and Esther a four week class at Fremantle Art Centre – a brand new FAC initiative in tiny tots arty exploration.
I hung around outside, (lets be truthful again – in the cafe:) just in case Miff needed to hand-pass Flick. Little Ellie spent the 45 minutes touring the exhibitions with her other Gran.
It is good to be proactive. I want these little ones to grow up feeling as comfortable with art as they already are with books and building and new food experiences and all the things that are important to me. Others can add the sporting touches.

A quick over-nighter at our little house was much needed – I have had a three week gap. The garden is now dormant so there are few chores outside but nature is showing me fresh delights. 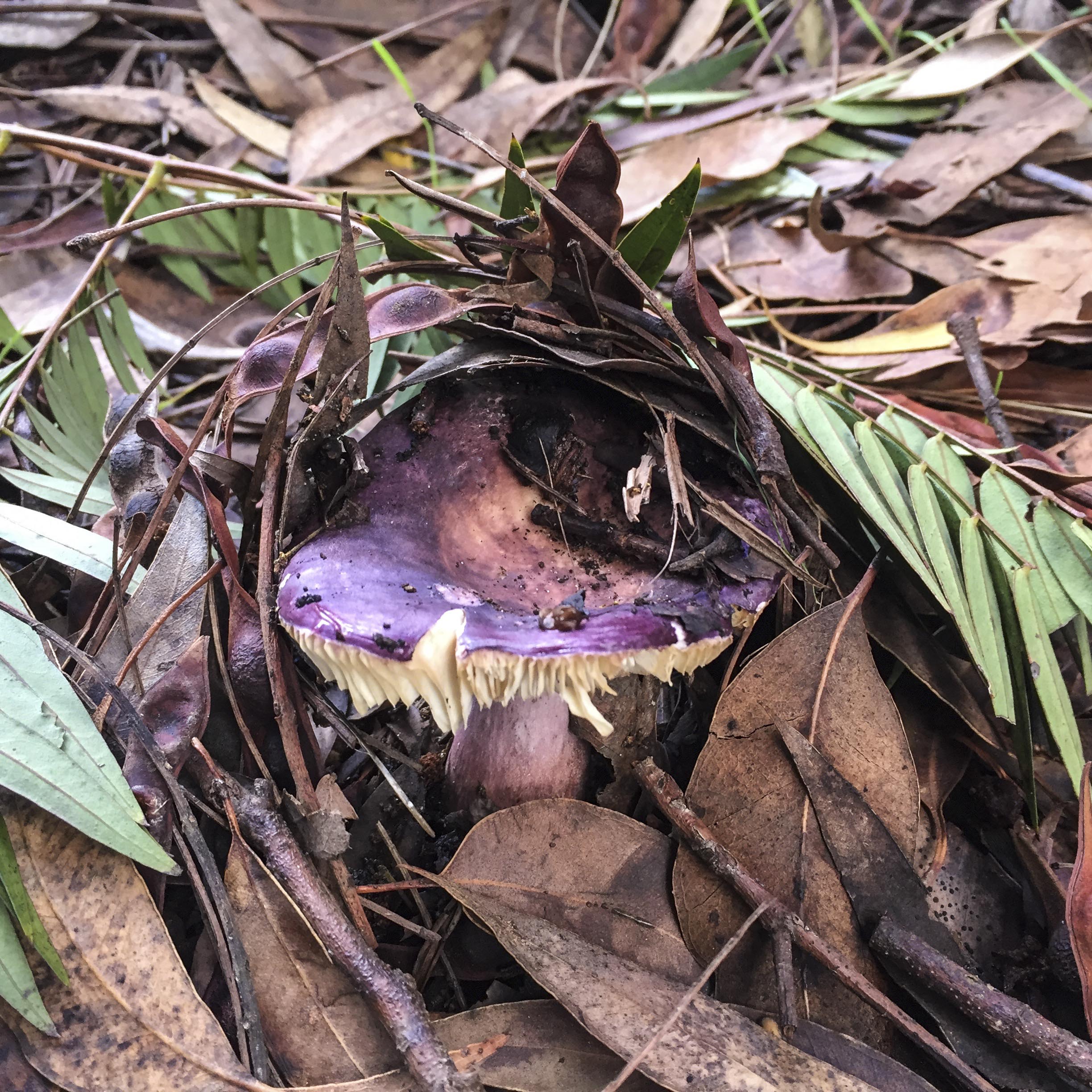 Last year, around this time, little mushrooms/toadstools had popped up in the leaf litter at the back of the property and I eagerly photographed them. 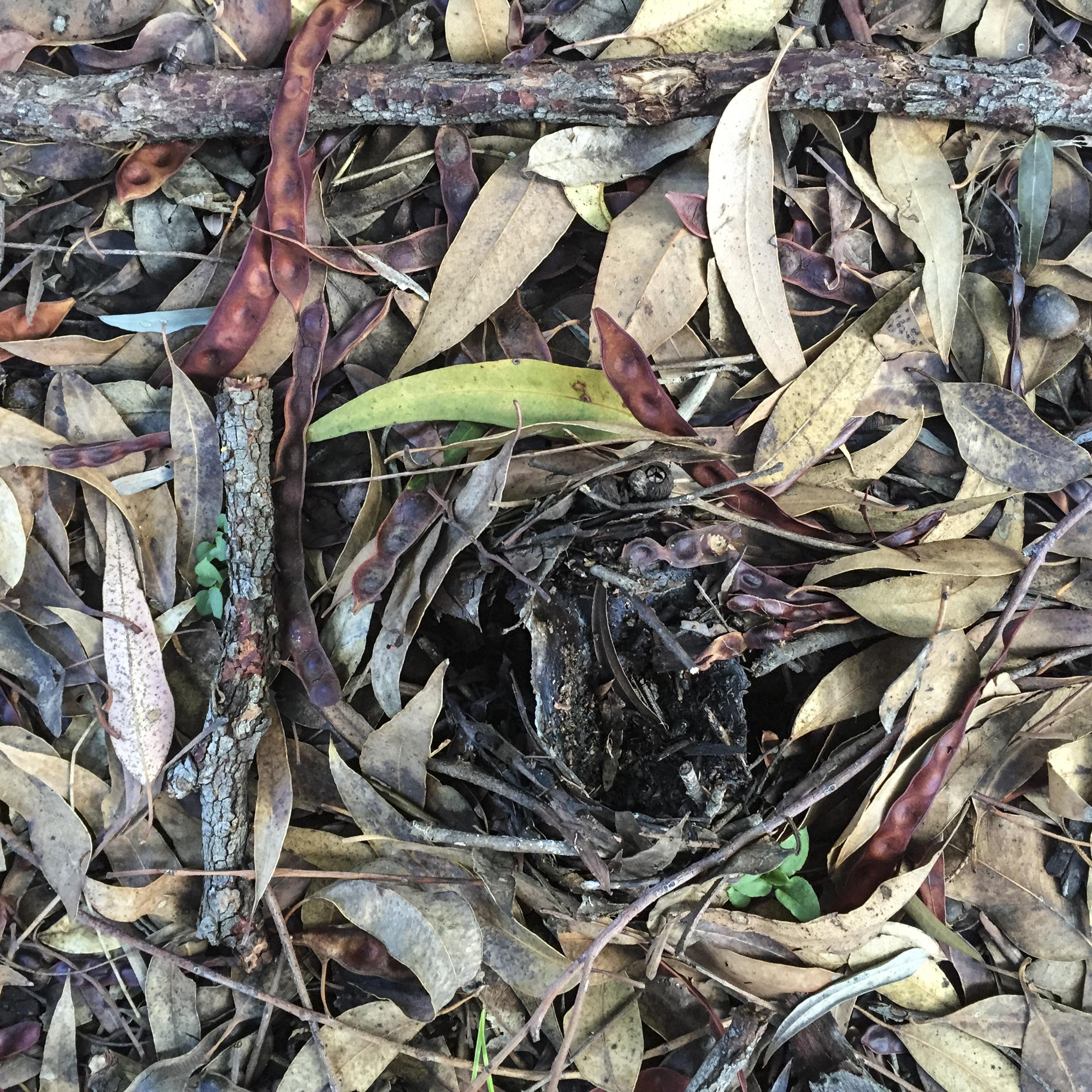 This week many more were emerging and they seemed to be different varieties.
The loveliest thing was that they seemed to emerge from little bushland nests. As they pushed their heads up the leaf litter had settled in shape that echoed theirs.

We made a quick trip to the river – the bloke loves checking the water levels – and a tiny ramble near our summer swimming hole filled our eyeballs with bush treasures. 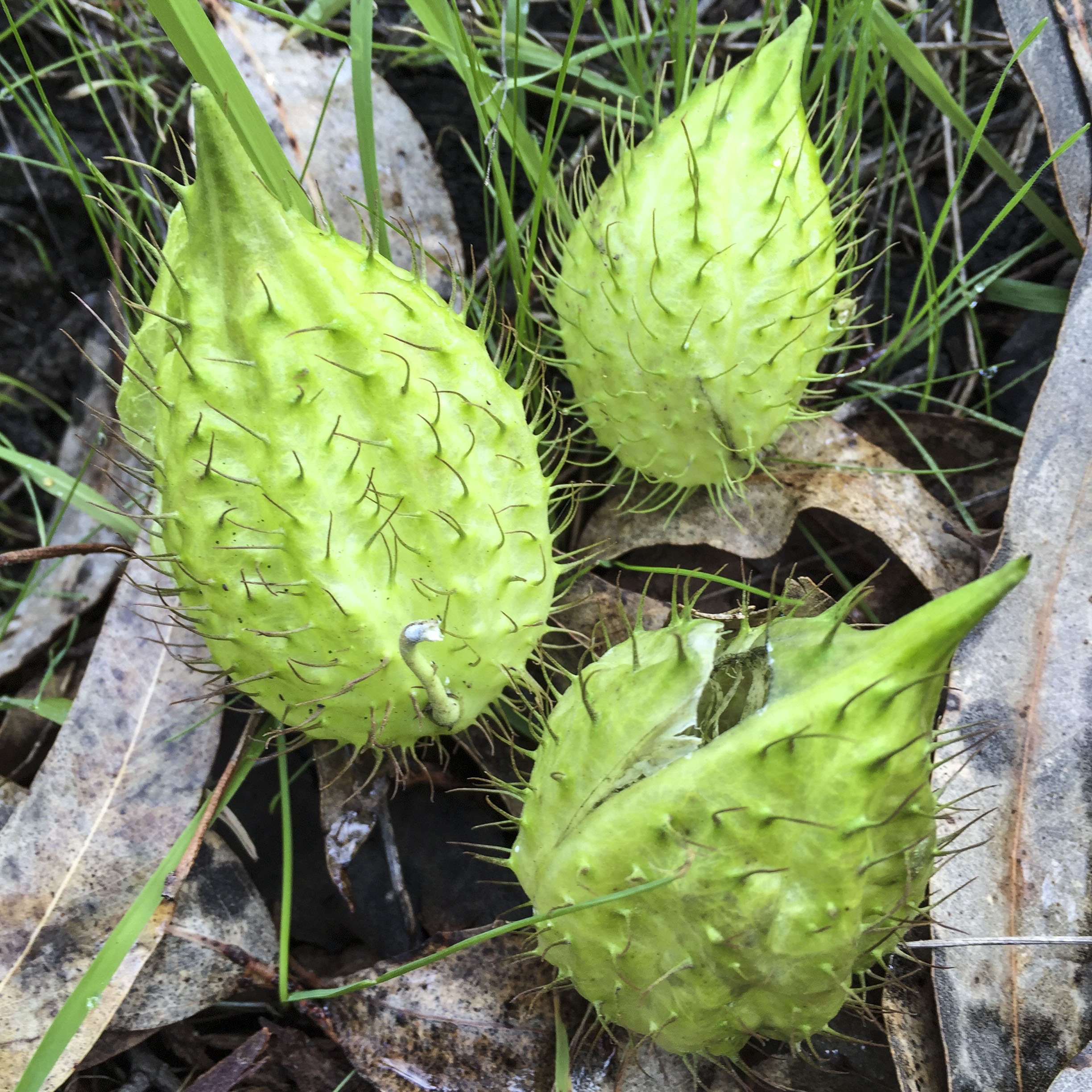 Wattles sported prickly seed pods that opened exposing a beautiful looking, and feeling, silk fibre. It really needed collecting, but not this year… 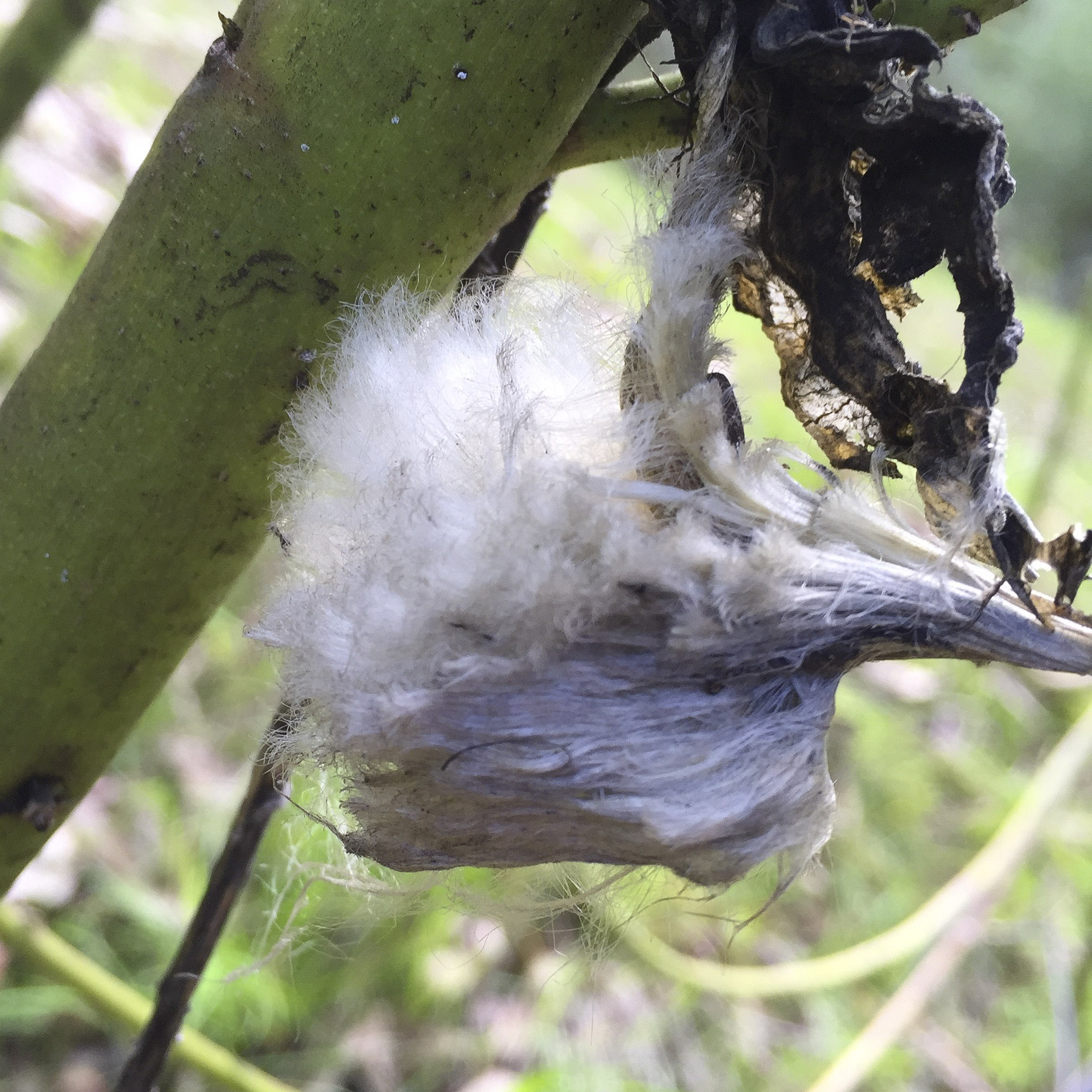 Stripey caterpillars, that really needed drawing, fed on the leaves. 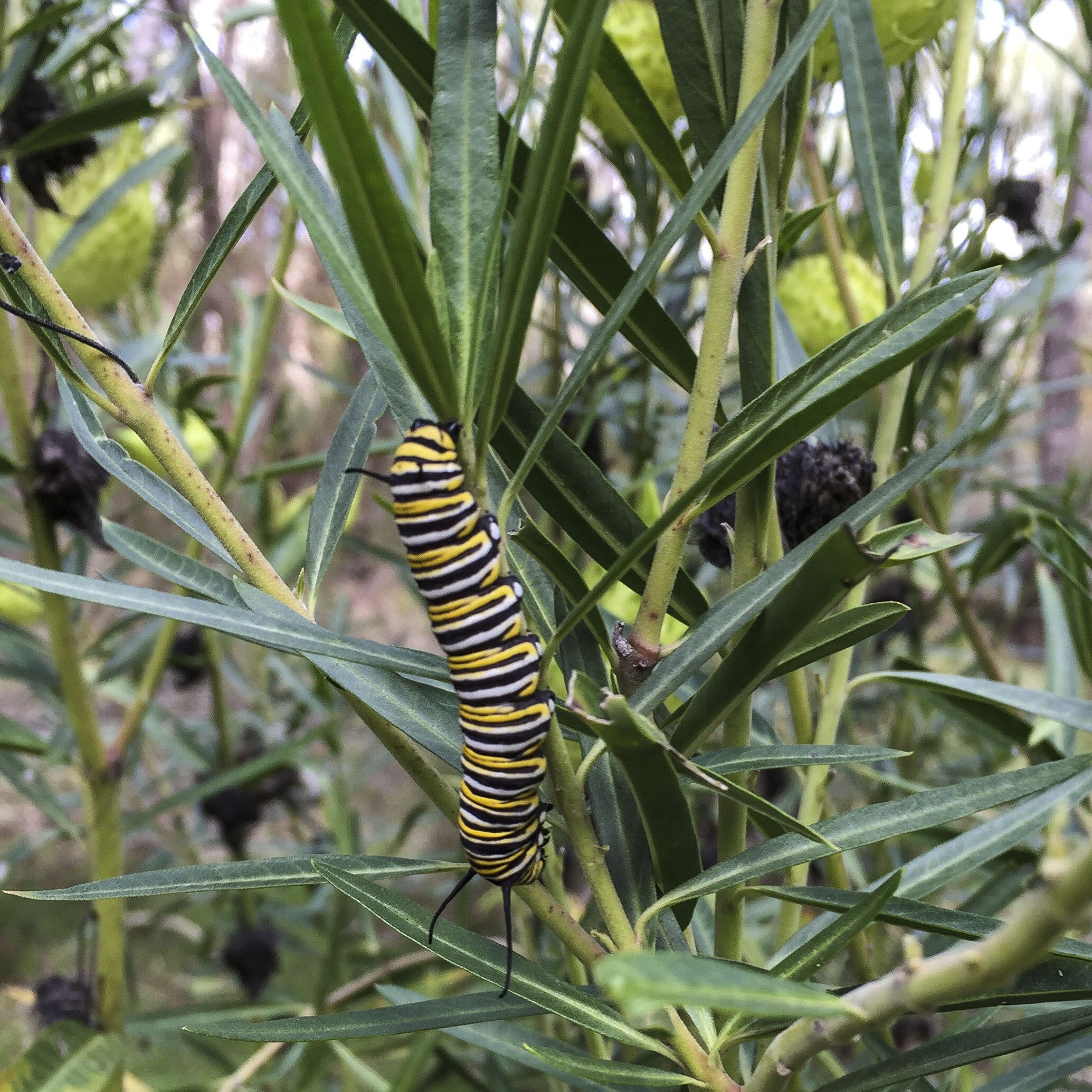 There were logs with lichens and all sorts of delicious textures and colours and the water was winter clear.
Aaaaaah.

My regular walk to the Co-Op for a few supplies was also made more interesting when I stopped to talk to a lady walking with her magpie on a lead. A conversation was sorely needed. Getting up close reiterated my current love of exploring feathers. 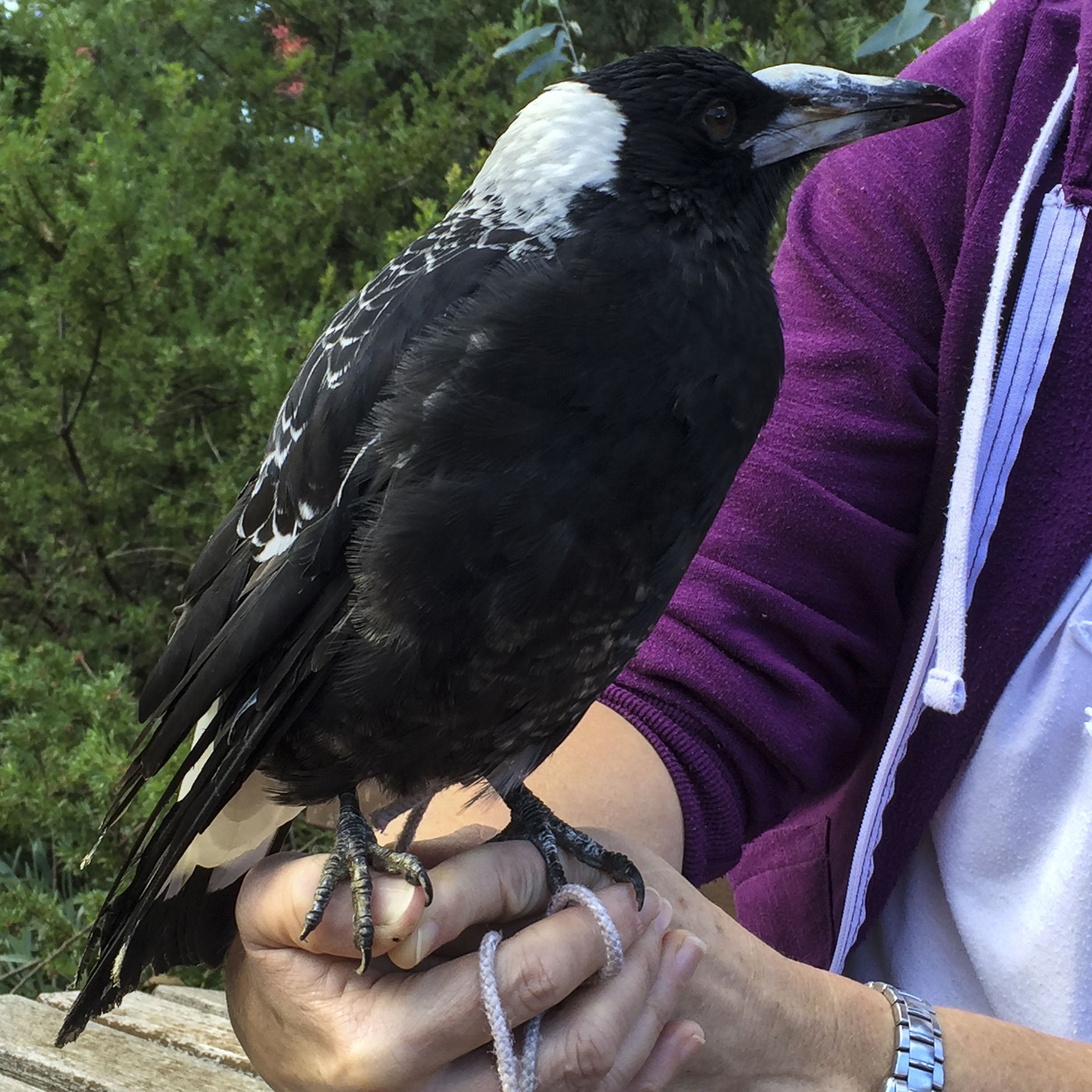 Joker was rescued as a fledgling and has some icky deformaties but is inquisitive and happy in company.
The joys of life are sometimes writ small, this was one of those delightful encounters. Beautiful.