The week was off to an task-driven start on Monday morn when I delivered my car for an overdue service. I always choose to stay with the car if possible rather than be slowly driven home in the courtesy bus – I have seen how long this can take and I’d rather take my basket of tasks and some just-in-case reading to keep me positively occupied instead.
Three hours and fifteen minutes later they efficiently handed me back the keys to my clean and happy car.

My morning’s basket workload was fruitful.
Yet another brilliant idea for a series of artworks exploded in my head last week (sigh) and I needed to do some research and drawings to try to work out if it could work.

I do get a bit frustrated with myself though.
One idea seems to regularly beget the next brilliant neon spark of a work or a series....
The series thing is almost essential to try to nail the idea ….which variant is the one that glows brightest in my head? Is the first thought going to translate into the best piece? Or is it one of the consequent visions? I just don’t have/make/devote the time to following many thought-lines through though….

I have two threads to my making life – the functional and the art with-a-story.
The functional quilts, pots, clothes, cushions etch may also have a story but often their raison d’etre is to fit with function or decor or recipient.
This work is a doddle!

The ‘art with-a-story’ is full of challenges and it is with such challenges that I grow.
I will never be taller…. but I hope to be forever learning.
My artwork, with a background story, is taking my learning in all sorts of directions.
So, a couple of weeks ago, the vision that appeared was of a quilt that was knitted. Hmmm.
I am no longer certain of the genesis of the idea but as I am immersed in the history of domestic textiles combined with a heap of other interests, I can only assume that the doilies segued into knitting?
The vision was clear, though after drawing down from it all week it is fading fast- another pointer that I should be making a detailed drawing quickly perhaps?
Oh for being able to take the equivalent of a noggin screenshot! 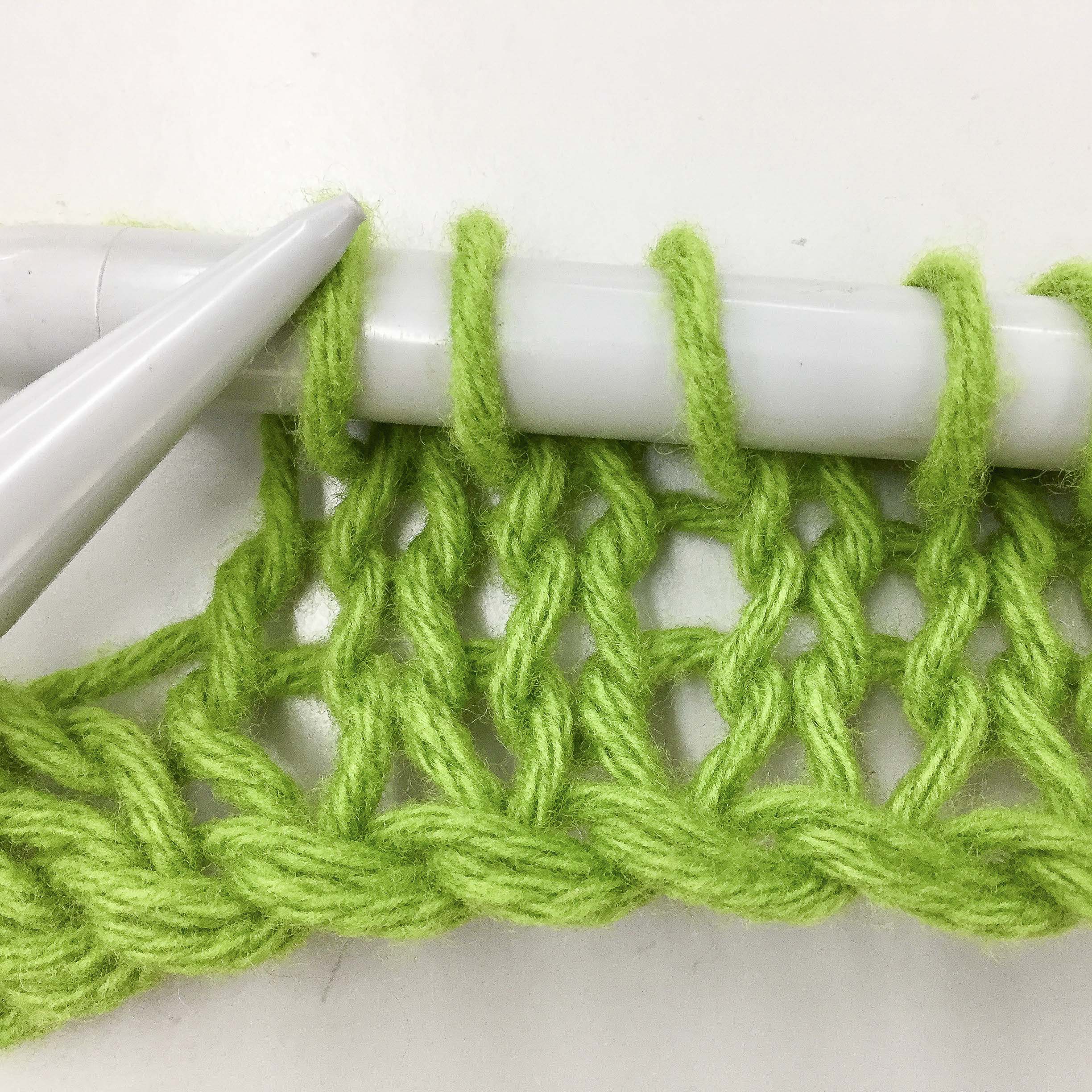 So…. whilst I was having my car serviced my basket was laden with knitting books.
I needed to unravel the process of knitting to make it work in 2D and most likely quilt form.
I grew up knitting and it is for me a reflex action rather than a visually observed task.
I grabbed the largest needles and yarn at hand to knit a sample that I could then ‘dissect and draw’.
Not much help but it was a start.
The illos from modern books were not helpful either so I also turned back to the antique patterns and my precious Weldon’s books.

Slowly I was able to work out the two dimensional rhythm.

When I returned home I cut out the rows to see if they would interlock.
Too squeezy… though I think that was because I was working with inflexible paper not flexible yarn.
I changed the proportion and elongated each ‘stitch’ and bingo….interlocking beauties. 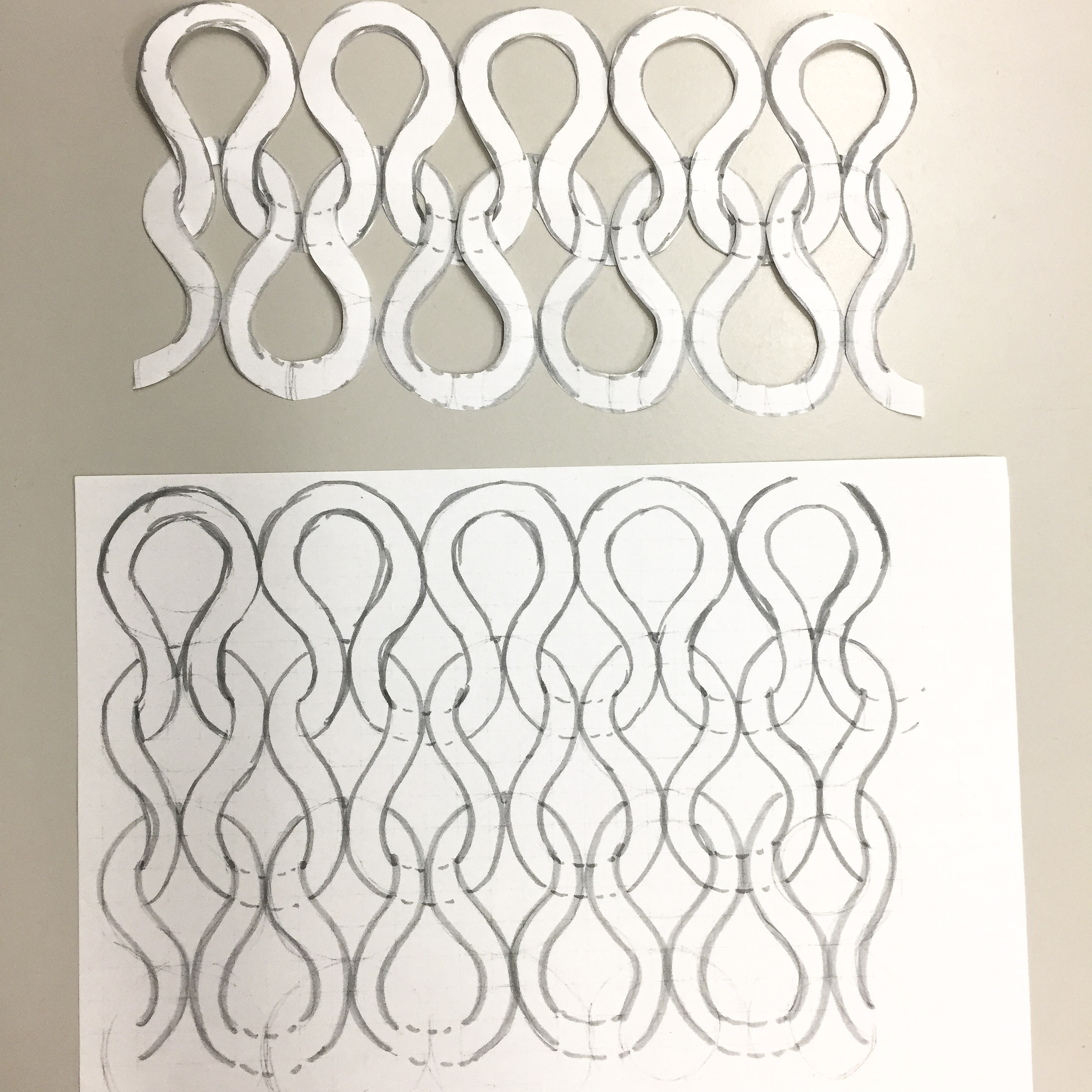 As I imagined the piece on the wall I wanted a cast-on start at the base but not a cast off at the top (though the top is not resolved from a hanging viewpoint yet).
The cast-on rows look great. 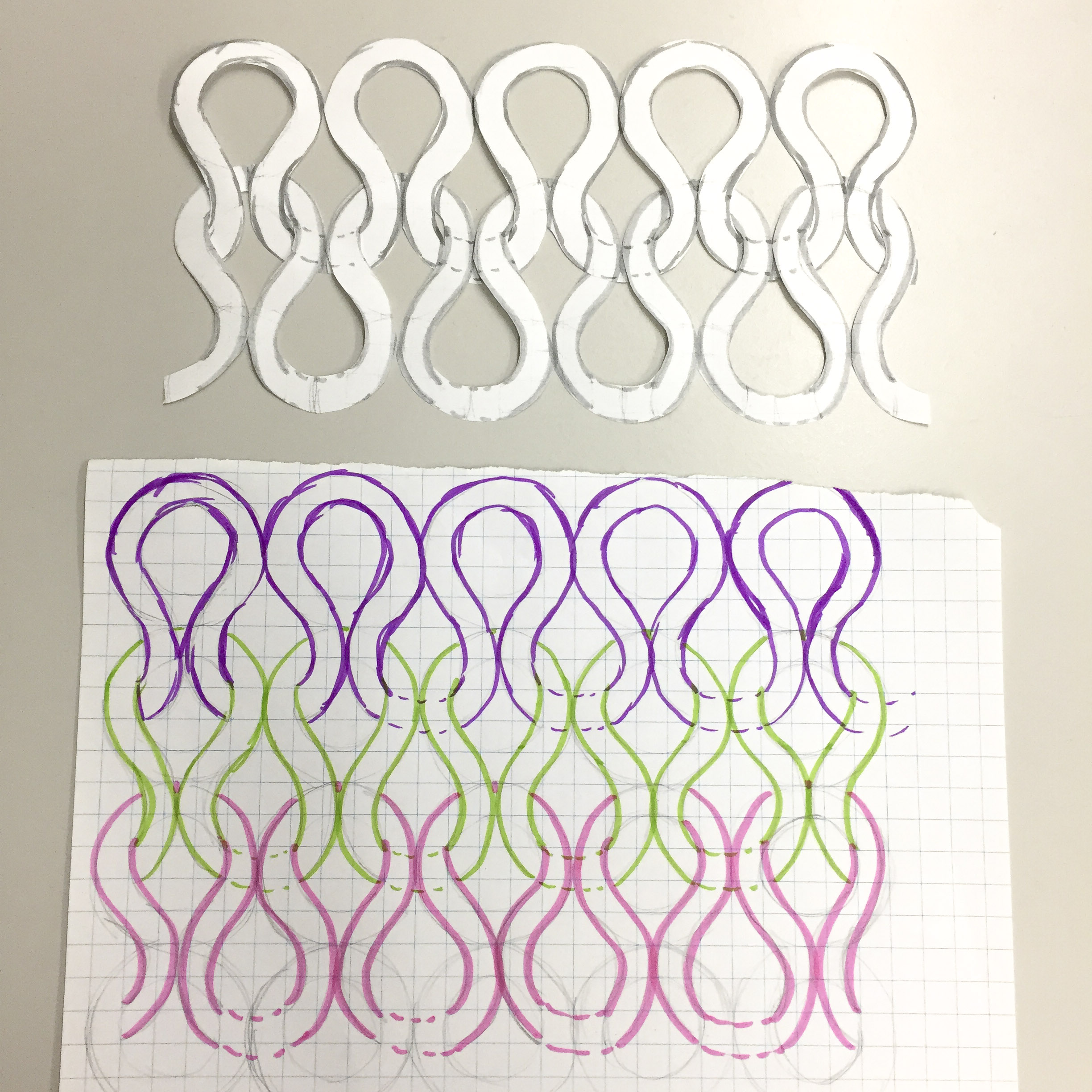 The other interesting thing about knitting, when you observe it closely is the edge – the turning from front to back – with its counterbalanced angles the end stitch is not elegant.
To work with total veracity would make the work visually messy.
Crisp and clean is the look I desire so the design moves on with visual simplicity instead.

Up to the scanner, to Indesign and to my freshly serviced big printer to plot in and resize the drawings.
The shapes are not mathematically perfect yet but I need to see if I can move forward with this idea or discount it early if I cannot get it to work. 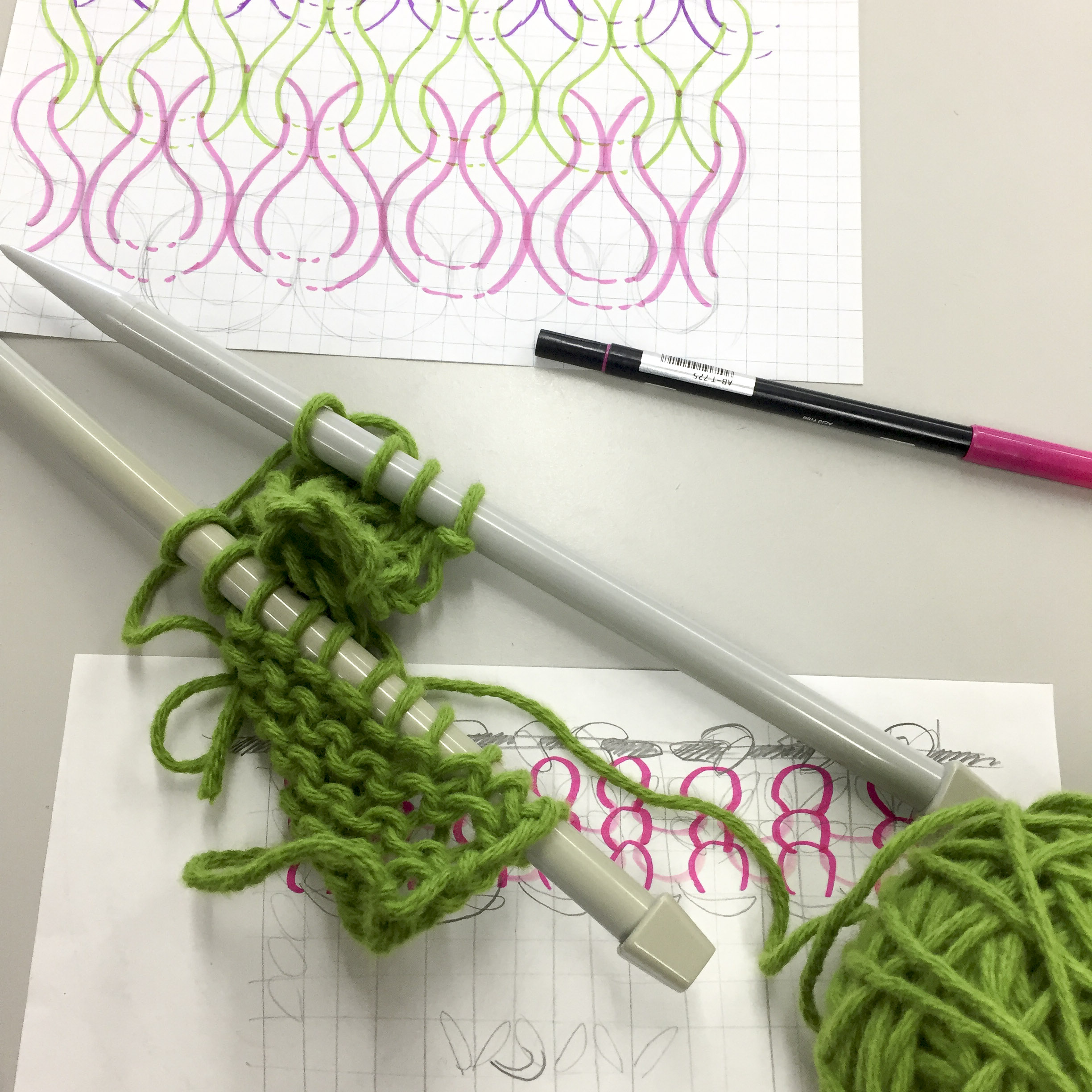 There are loads of ways to fail with this piece….design, materials, the convincing raison d’etre, the functionality of the hang, how to pack it for travel, the choice, the printing and placement of imagery on the units….all need to add to the story not detract from it. 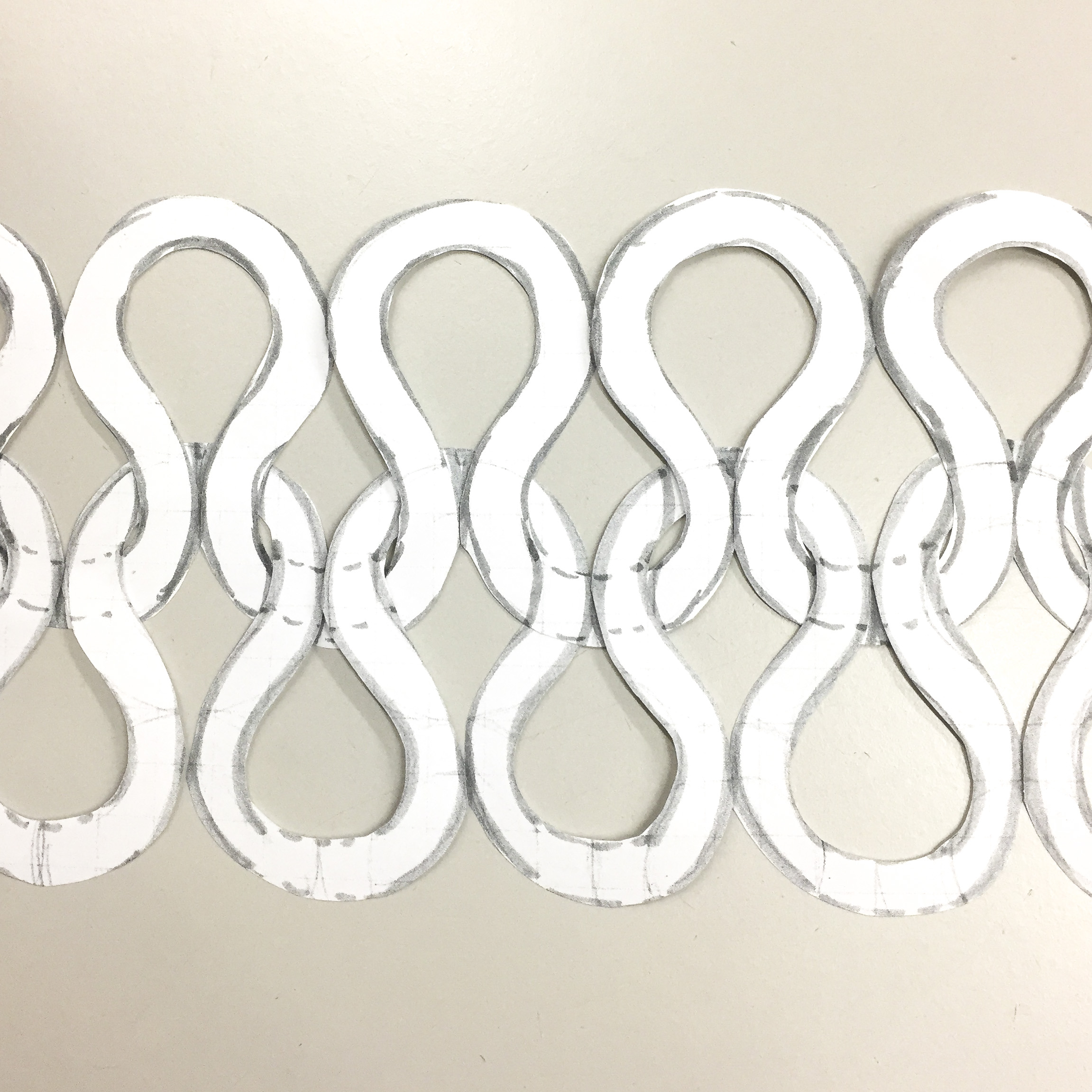 I have such a long way to go with this simple idea and yet I may fail early if the jigsaw starts to become too finicky.
At weeks’ end I have worked on two test rows but so far neither excites me…not firm enough, not clean enough, not pleasurable to make. I will return to it in the coming week with a mathematically correct, perfectly sized template and I will try to resolve the edge treatments and layering of the units.
Hopefully, with more success, I will then move on to the digital imagery that will add to the surface design and explain, in part, the idea of the piece. 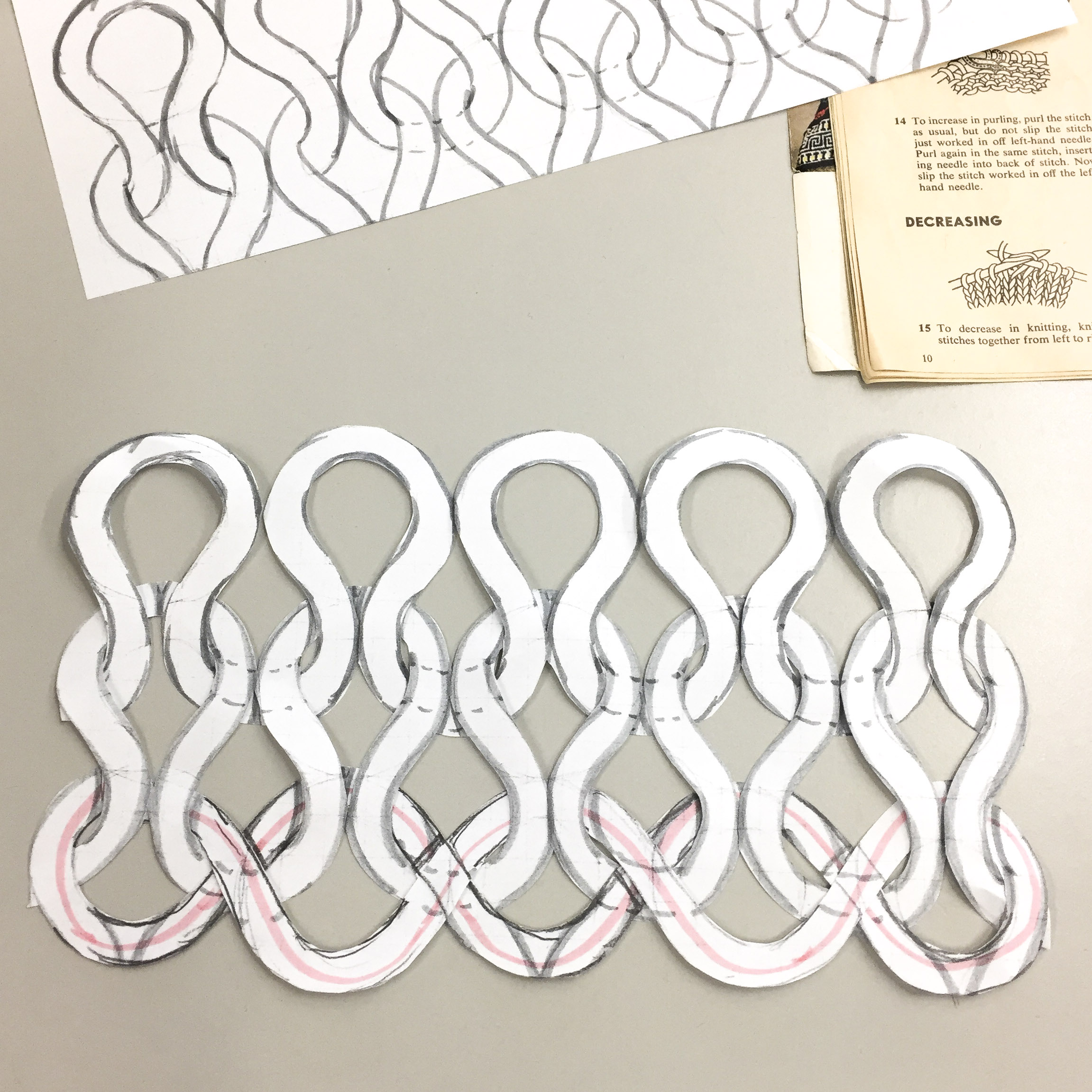 In between my to-ing and fro-ing in knitting/quilting land I;

Listen to a pile of Richard Fidler Conversations to keep my mid distracted.
I also watch a few Ted Talks. I need to keep my brain ticking over otherwise I am sorely tempted to move away from mundane processes. 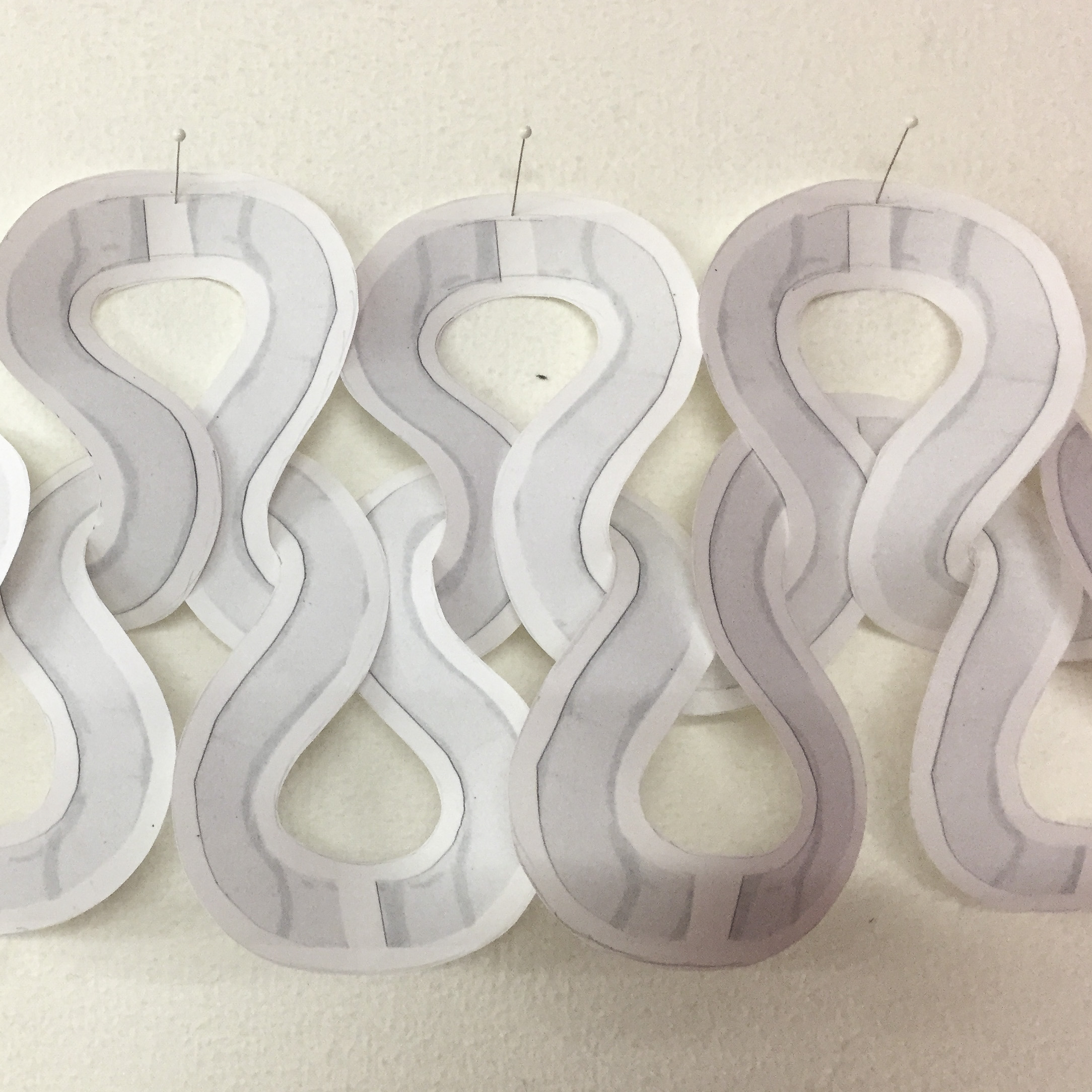 I head to Betroffenheit with a friend. This challenging but beautiful and absorbing dancework is part of the PIAF program. The movements are an artwork. The background story is distressing but presents a way forward out of the dark?
One character haunts me though – a female clown/circus/vaudeville dancer with the most changeable expressive body and face. Dual characters and louche movements in turn creepy and caring. Wonderful to see with a like-minded friend – neither of us afraid of the dark…. 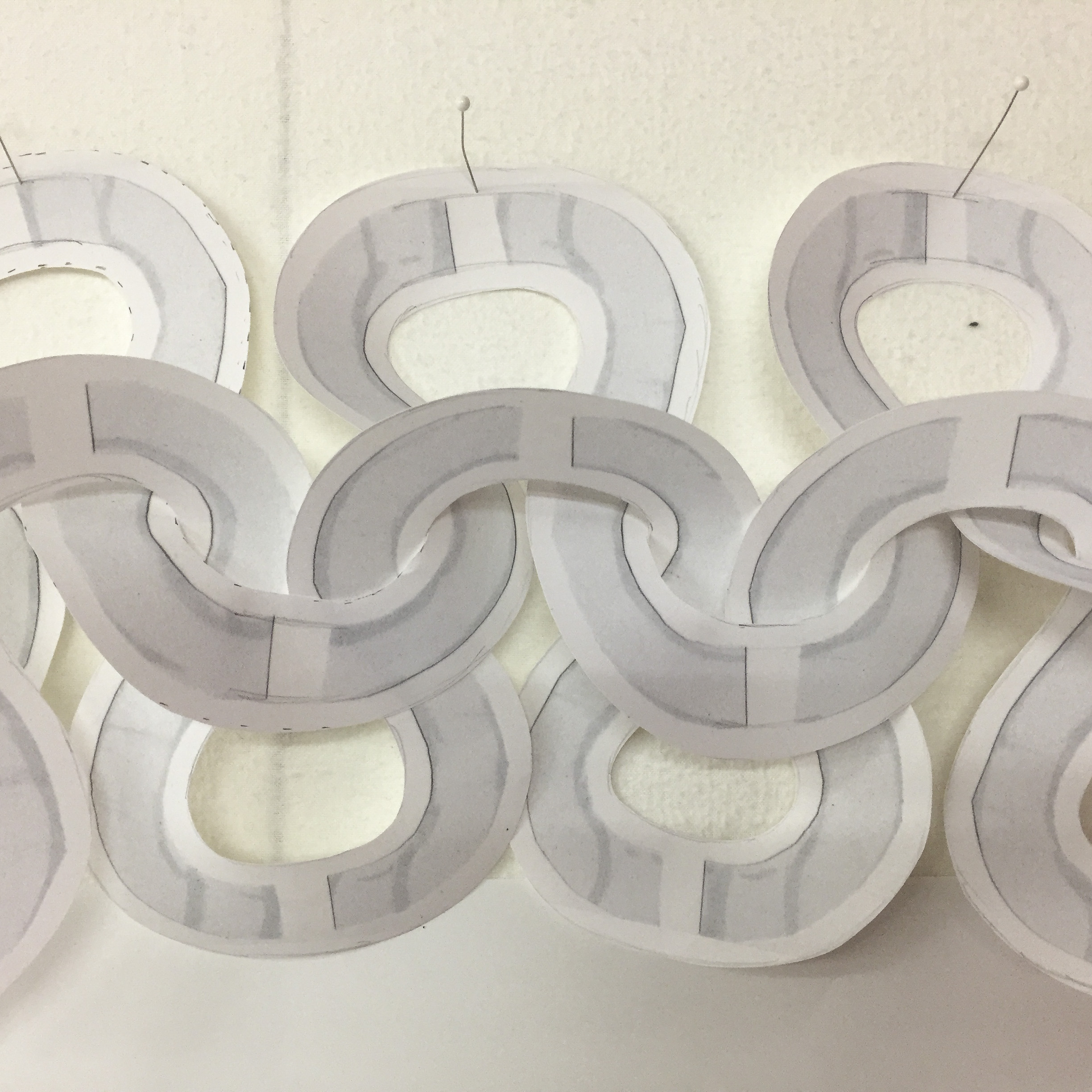 With other friends I sally forth to LWAG for another PIAF event. Helen Britton’s exhibition had the three of us enthralled. Tiny jewellry and large sculptures. The Bizarre and beautiful. Luscious materials and the everyday. Carnival dark and clever with simplicity.
I took no photos as it was enthralling to simply observe within the trio of shared thoughts rather than a lens…. I will be forced to return.

I was in a similar headspace on Sunday as I took the bloke to the Fremantle Maritime Museum to see Traders and Travellers.
When I started this blog, whilst searching for a way forward in my artwork, it was to the many historical references of objects, places and journeys I had collected that really flipped a switch in my head. 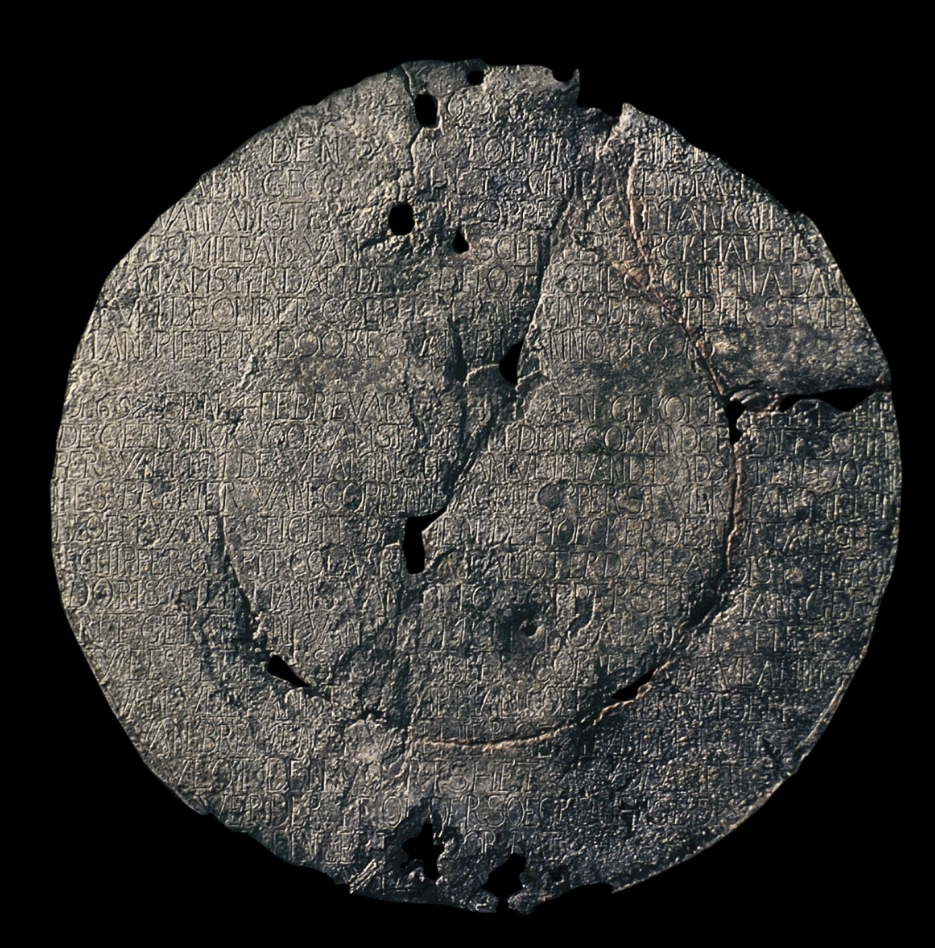 Some of the earliest objects in this exhibition, such as the metal plates left as markers, had that switch twitching again. Whilst not a big exhibition, it had me breezing quickly through the more modern artifacts but the first sections have stayed in my mind.
I need to visit them again too. They are right up my alley:) 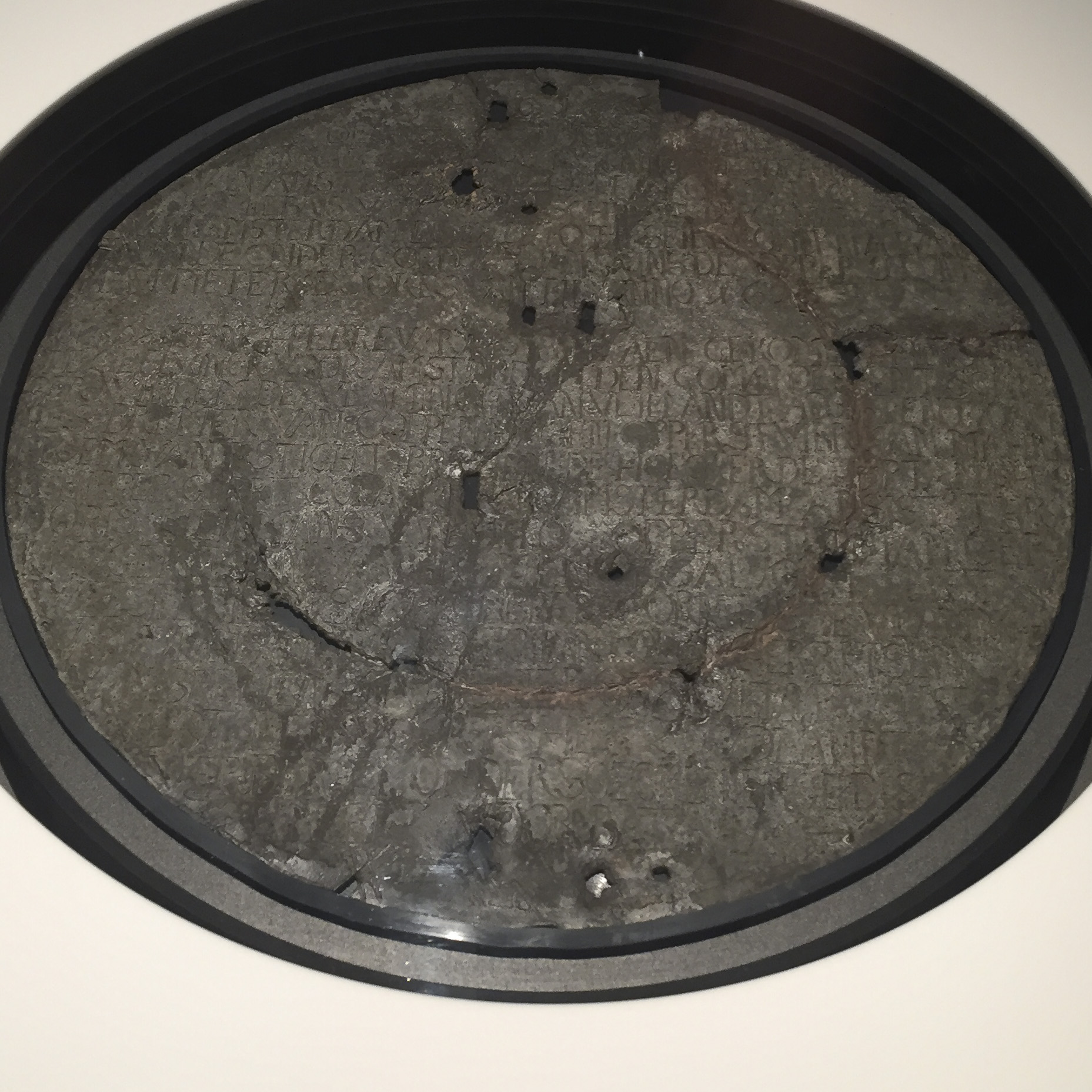 And the week ended with a birthday dinner….and yummy birthday cake.
Flick is now one, as is Ellie, and they both tootle around in the Sunday night chaos. Ellie is now forming recognisable words whilst Flick is just starting to work on it.
The old pair, three-year-old’s George and Esther, are great fun. We feed them with challenges and concepts continually – the advantage of have eight fun-loving adults in the same space.
It will be Bran’s turn to shine soon too…he’ll catch up to the girls in May.